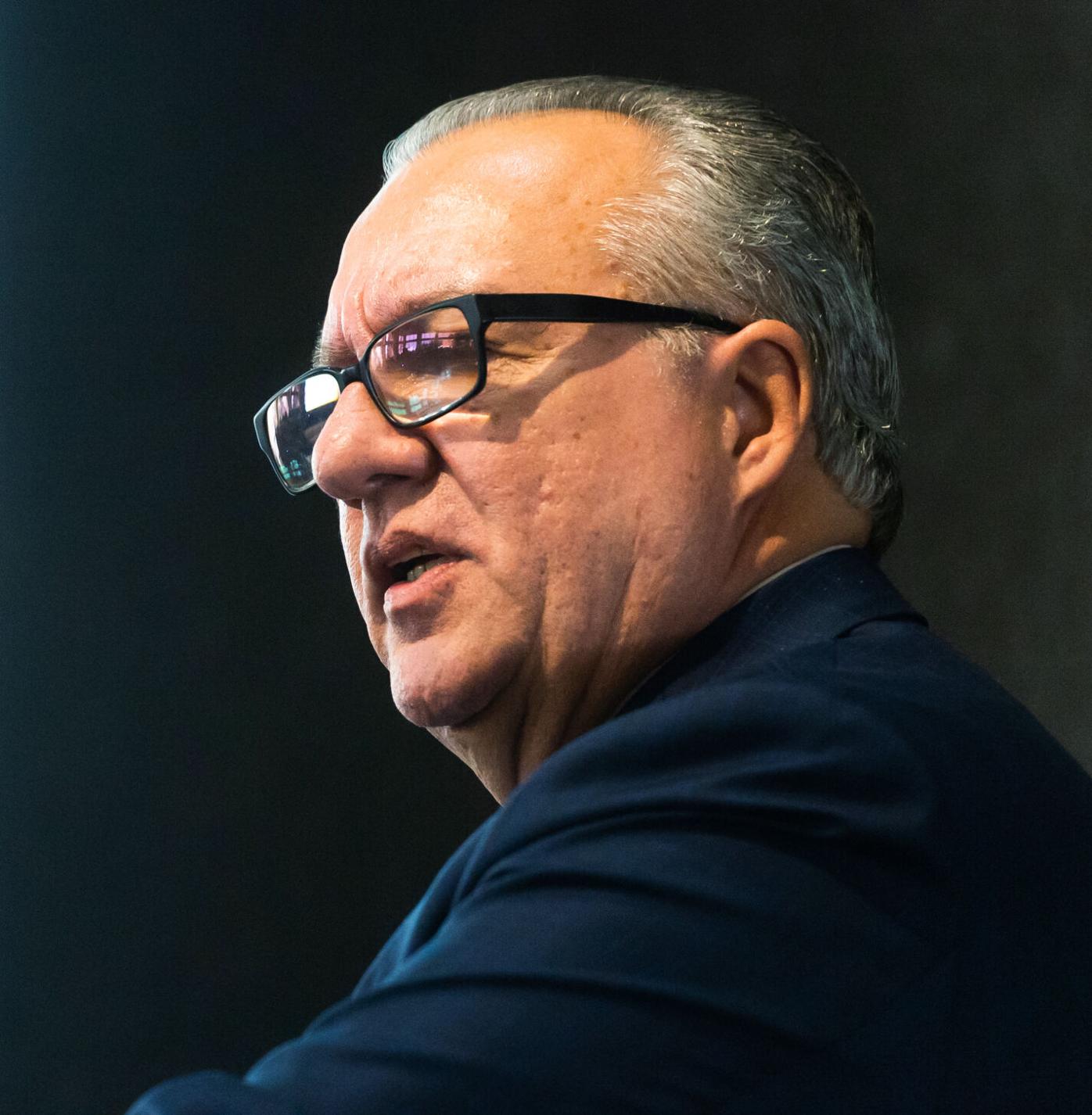 Cleveland-Cliffs CEO Lourenco Goncalves delivers his annual state of the company address to local business leaders, union officials and elected representatives March 5, 2019 at the Minnestoa Discovery Center in Chisholm. A deal was announced Monday that Cleveland-Cliffs is buying ArcelorMittal USA in a $1.4 Billion dollars. 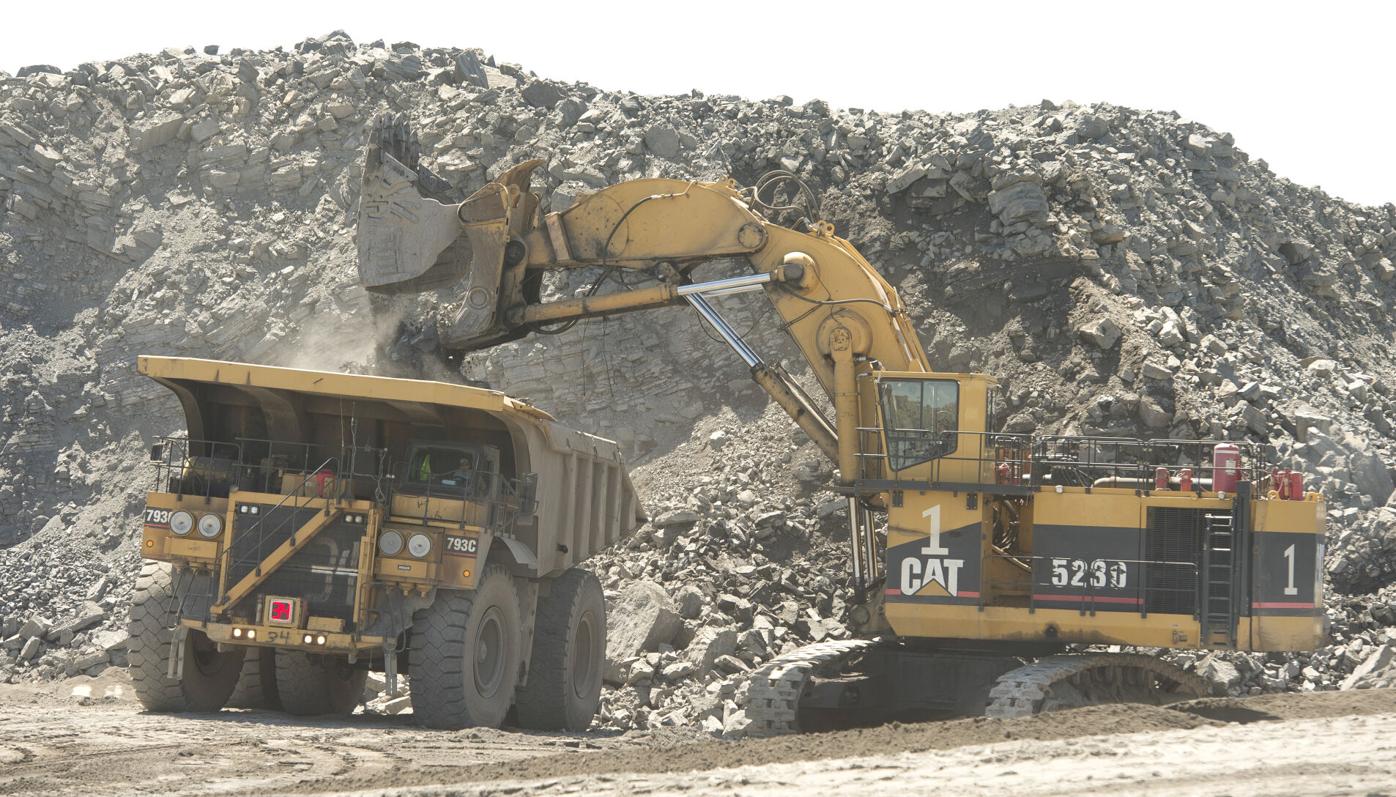 Ore is loaded up to be brought for processing at the ArcelorMittal mine in Virginia June 21, 2016. Cleveland-Cliffs Inc. is buying ArcelorMittal USA for $1.4 billion dollars.

Cleveland-Cliffs announced early Monday morning that it was buying ArcelorMittal USA in a $1.4 billion deal that gives the company local control of the Minorca Mine in Virginia and a majority ownership of Hibbing Taconite.

It’s a blockbuster agreement with impacts across the entire domestic steel industry that makes Cliffs the largest iron ore producer in North America, leaving it and U.S. Steel as the only two operators on the Iron Range.

The deal is expected to close by the end of the year.

Earlier this year, Cliffs closed on a $1.1 billion deal to become an integrated steel company by purchasing AK Steel, adding steelmaking capabilities to its portfolio across the U.S.

This most recent purchase shores up the pellet supply line for the Range mines at the combined company of Cliffs and Arcelor, which have long partnered on contracts, by further integrating the local industry and giving Cliffs the chance to feed electric arc furnaces (EAF) previously employed in the AK Steel and Arcelor fleet. Those EAFs will allow Cliffs to expand its hot-briquetted iron (HBI) footprint, long considered the premier future market of the steelmaking process.

“It means our long-term commitment to the Iron Range is as strong as ever,” said Lourenco Goncalves, chairman, president and CEO of Cliffs, in a phone interview Monday afternoon. “We will continue to operate. We will continue to employ people and develop the business.”

The company would control four Range mines if the purchase is approved — Northshore Mining, United Taconite, Hibbing Taconite and Minorca.

Cliffs will face a significant hurdle in the coming years as it comes into control of Hibbing Taconite. The company was the manager of the mine until August 2019, when Goncalves said they wanted to focus on wholly owned operations and returned daily duties to Arcelor.

Hibbing Taconite was a joint operation of Arcelor (62.3 percent ownership), Cliffs (23) and U.S. Steel (14.7) and as of August 2019 managed by Arcelor. If its purchase clears regulators, Cliffs would own 85.3 percent of the operation. But the life of the mine is a serious concern for the local Range economy and the United Steelworkers union with pellet production expected to dry up by 2024.

Goncalves said he’s focused on the company’s reserves in Nashwauk, which are currently connected to the half-built Essar project on the adjacent land. Cliffs has been in a long battle over Nashwauk and wants to use that land — about 3,700 acres purchased in 2018 — to extend Hibbing Taconite.

In the past, Arcelor had discussions with U.S. Steel over the so-called Carmi-Campbell land. The Carmi land, now part of Keewatin Taconite, has long been sought for Hibbing Taconite and could extend the mine’s life by 12 years and provide about 500 million tons of resources.

Goncalves said their own reserves are the “easiest path,” but said the company needs Gov. Tim Walz and the Minnesota Department of Natural Resources to work with them, give Cliffs control of the land and allow them to use potentially decades worth of ore at the site.

“It is totally unnatural that we can’t use that ore,” Goncalves said. “Why? What are we waiting for?”

When Essar Steel Minnesota was in the midst of constructing the plant in 2015, it eyed a pellet agreement with Arcelor, but the downturn and mismanagement of funds at the Nashwauk site stalled the project. Cliffs would go on to sign a 10-year pellet contract with Arcelor and Essar would file for bankruptcy the next year.

“That hope is over. It's gone. It doesn’t exist anymore,” Goncalves said of the company finishing the plant and turning a pellet agreement with Arcelor. Stelco, another company tied to the project as a potential offtake pellet contract, currently has a multi-year deal with U.S. Steel for pellets from Minntac in Mountain Iron. “There is no client. Game over. It’s Cleveland-Cliffs’ time in Nashwauk.”

Idling or closing Hibbing Taconite would be a big blow for the region. Its current operation supports more than 3,000 direct and indirect jobs across the Range.

In the wake of COVID-19, Arcelor recently idled Hibbing Taconite, laying off 650 hourly workers in May amid the coronavirus pandemic, but restarted the mine later in the summer.

Minorca Mine in Virginia has been a stalwart for local industry. It stayed open during the pandemic closures and also ran fully during the 2015 downturn caused by imported steel dumping.

“This transaction is a unique opportunity for ArcelorMittal to unlock significant value for shareholders while retaining exposure to the North American economy through our high-quality NAFTA assets alongside a participation in what will be a stronger, better integrated U.S. business," said Lakshmi Mittal, chairman and CEO of ArcelorMittal, in a statement Monday.

As part of the deal, Cliffs is buying six steel mills, eight finishing facilities, two iron ore mining and pelletizing operations and three coal and coke making operations. Terms of the agreement include $505 million in cash, $373 million in non-voting stock and 78.2 million shares of Cleveland-Cliffs common stock. The enterprise value of the deal, which includes debt and market capitalization, is estimated to be around $3.3 billion. Cliffs will now have a capacity of about 28 million long tons and the combined companies shipped 17 million tons last year.

The merger is expected to result in $150 million in annual savings through integration of the steel operations and avoiding paying market rate prices for pellets.

Goncalves said in the short term, nothing changes for the Iron Range workforce and the mines will continue to operate as-is. In the near future, it will depend on the state of Minnesota to help the company extend Hibbing Taconite.

In the long term: “Good things can happen. More production. More HBI. We might think about some new plant or operation on the Range.”

This story was updated at 2:40 p.m. with an interview with Cleveland-Cliffs CEO Lourenco Goncalves.