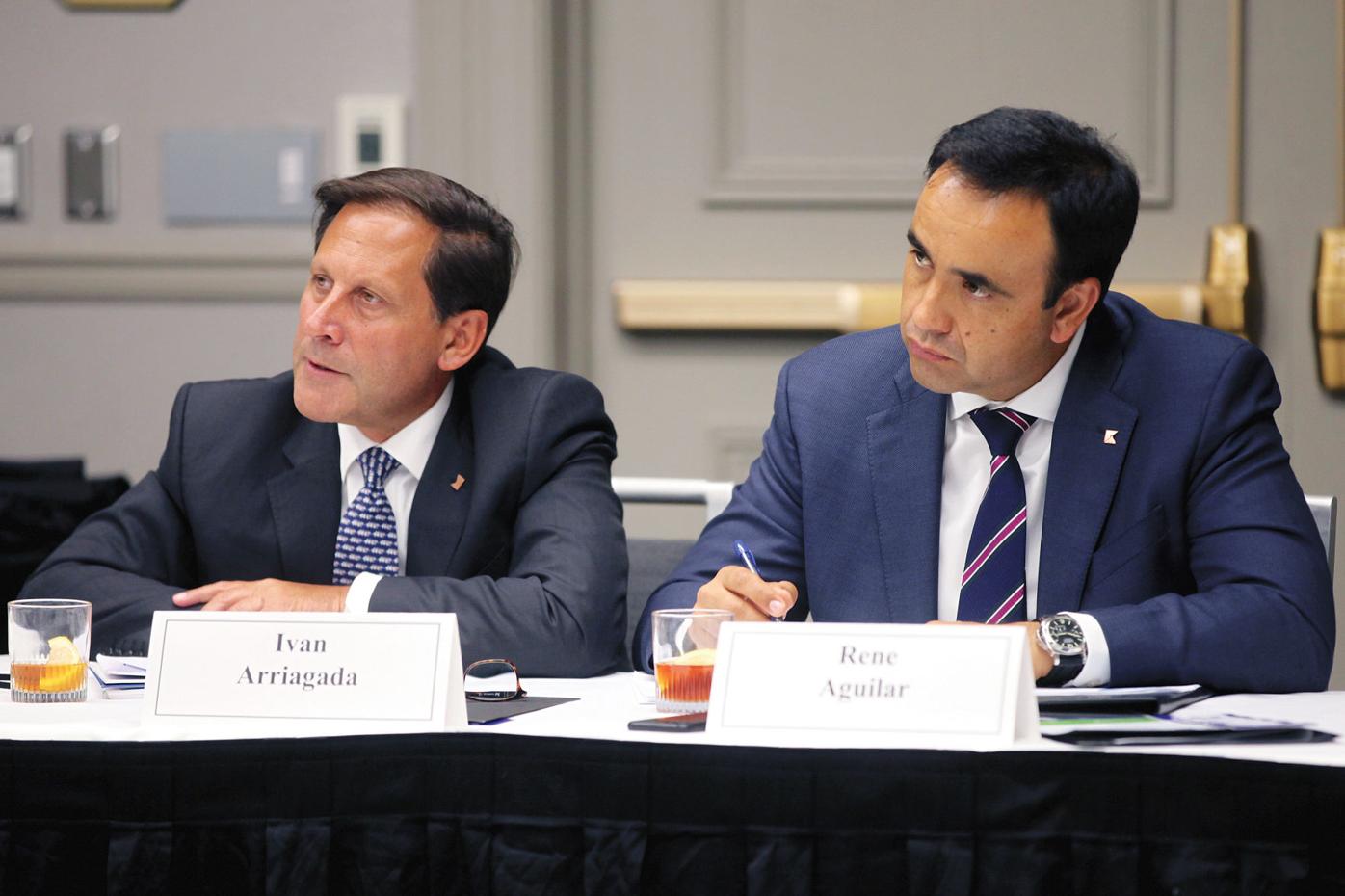 Antofagasta CEO Iván Arriagada and René Aguilar, vice president of corporate affairs and sustainability, listen to business and community leaders from the Iron Range on Tuesday at the Hilton Minneapolis in Minneapolis. 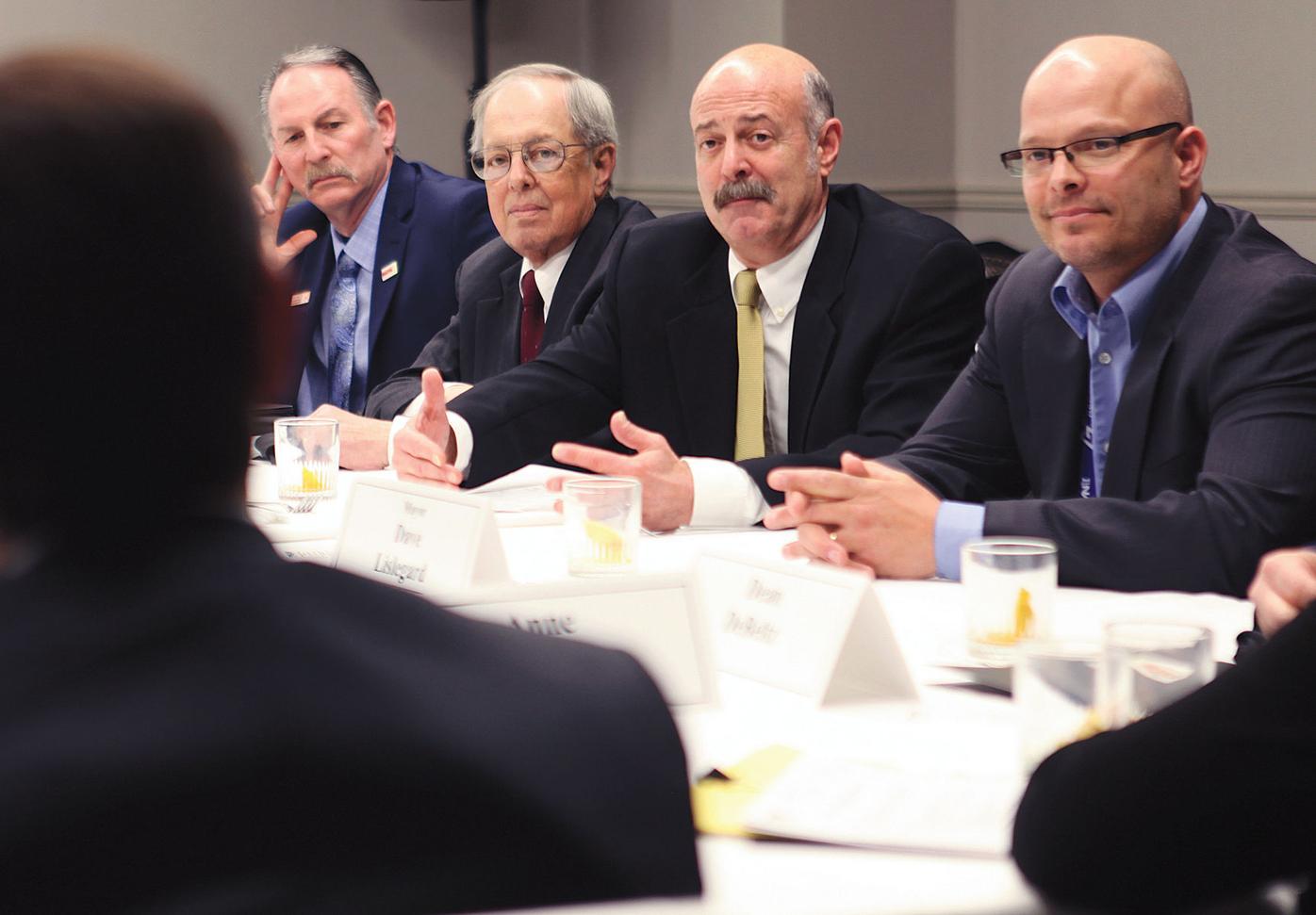 Antofagasta CEO Iván Arriagada and René Aguilar, vice president of corporate affairs and sustainability, listen to business and community leaders from the Iron Range on Tuesday at the Hilton Minneapolis in Minneapolis.

MINNEAPOLIS — In a conference room on the second floor of the Hilton Minneapolis, Iván Arriagada, the CEO of Chilean mining giant Antofagasta, sat down with some of the most powerful figures in northeastern Minnesota and the Iron Range.

The meeting, facilitated by the Range Association of Municipalities and Schools, focused on the company’s ambitions in Minnesota. There was talk of economic development, the science of copper mining and the environment as the copper company had its first face-to-face meeting with many of the stakeholders involved with the controversial project.

Antofagasta, through its subsidiary Twin Metals Minnesota, is pressing forward on an underground copper-nickel mine near Ely and the Boundary Waters Canoe Area Wilderness. Interest from the global company has sparked Iron Range mining supporters to hail its economic prospects, while environmentalists have warned against its potential to harm Boundary Waters.

On Tuesday, Arriagada said the company is looking forward to proposing a project and subjecting it to the state’s environmental review process.

“The science is there for developing the project in a protective way for the environment — that’s our commitment,” he said in an interview following the meeting. “We can use all the science and knowledge we have available today to design the project, from its inception, in a way that is protective of the environment and has minimal impact.”

Compared to its other international operations, Arriagada said the Twin Metals mine would be “fairly small” and was recently revised. It’s largest mine, Los Pelambres in Chile, produces more than 400,000 tonnes of copper annually. The company recently received environmental approval for a $1.1 billion upgrade to the mine.

But Los Pelambres hasn’t come without its run-ins with Chilean regulators.

In 2016, Antofagasta was charged with nine infractions by the government — five considered serious — that included the extraction of water from unauthorized locations, the construction of unauthorized wells and the failure to reforest some zones as required by law. The company told mining.com last year that it submitted a plan to comply and is awaiting approval.

"Those nine charges are related to vegetation and other regulatory issues,” the company said in a statement at the time. “None of them put lives or the environment at risk.”

Earlier that year Antofagasta settled a dispute with a local community over water supplies to a mine. Los Pelambres was temporarily halted by protesters against a dam they blamed for siphoning off water from a nearby river. Shortly after taking over as CEO, Arriagada guided the sides to a resolution, according The Telegraph.

Company officials said many of the regulations in Chile are based off those in North America. and “are equal to the best standard you would find elsewhere.”

“A terrific overview of company’s work on their mining and development in Chile, and how their environmental standards are rigorous as well,” said Doug Loon, president of the Minnesota Chamber of Commerce, who sat in on the meeting. “We encourage them to share their story about their work in other mines and the safety standards that they have and their permitting process. There are similarities.”

A common thread between the company and the regional officials was that when a project proposal comes to fruition, a fair permitting process follow. Arriagada said 2016 actions by Obama administration to deny the Twin Metals mineral lease renewal — and withdraw more than 234,000 acres of land in the Superior National Forest — were “disheartening.”

The Twin Metals project is opposed by Minnesota Gov. Mark Dayton, who is currently being sued by an Iron Range jobs group for his decision to pull state leases from the company.

“It was driven by perceptions and ideas, but not science,” Arriagada said. “A project of this type, with enormous benefit, it needs to be science based.”

After the Trump administration took office in January, a more favorable climate for the extraction industry followed. In December, the administration reversed the federal government’s opinion to strip the leases from Twin Metals and allow the renewal process to go forward. A spokesperson for Twin Metals said Tuesday the company is trying to reach the point it was at before the leases were pulled, adding it will “take some time.”

Arriagada told Reuters in December, following the action, that he expects the mine could be operational within a decade. He believes the timeline is still viable despite not having the leases, a pending decision on the land withdrawal expected at the end of the year and the nearly two decades-long environmental and permitting process for PolyMet, an open pit copper-nickel mine in Minnesota.

“Lead times are between 6-8 years,” he said Tuesday. “We take a long-term view. We’re prepared to work through that period and hope that’s the sort of timing that is needed.”

While Twin Metals and Antofagasta have been mum on details for a project scheme, the former said last November that a formal proposal could come “in late 2018 or early 2019.”

A proposal would answer some of the lingering questions about the project — which to date remains conceptual — such as a size, scope and cost. It would also provide a glimpse into the company’s plans to protect waterways near the mine.

“The project is a tremendous opportunity to develop an economic benefit for the communities in jobs, taxation and prosperity,” Arriagada said. “We want to have the right to be able to develop and present a project for a proper review from an environmental standpoint.”