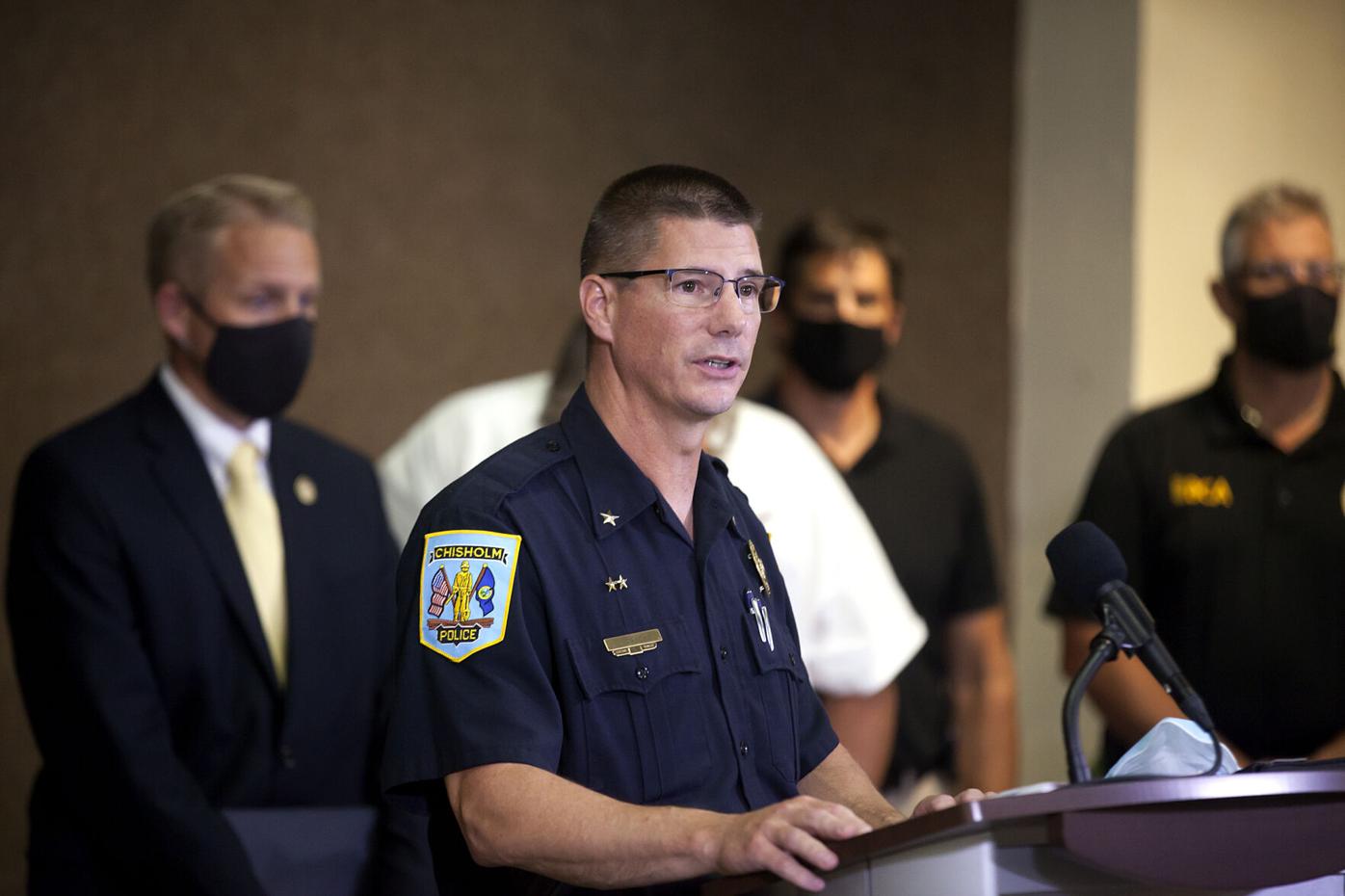 Chisholm Police Chief Vern Manner, surrounded by investigators and prosecutors, speaks about an arrest made in the 34-year-old murder of Nancy Daugherty during a press conference Wednesday at the Minnesota Discovery Center in Chisholm. (Jerry Burnes/Mesabi Tribune) 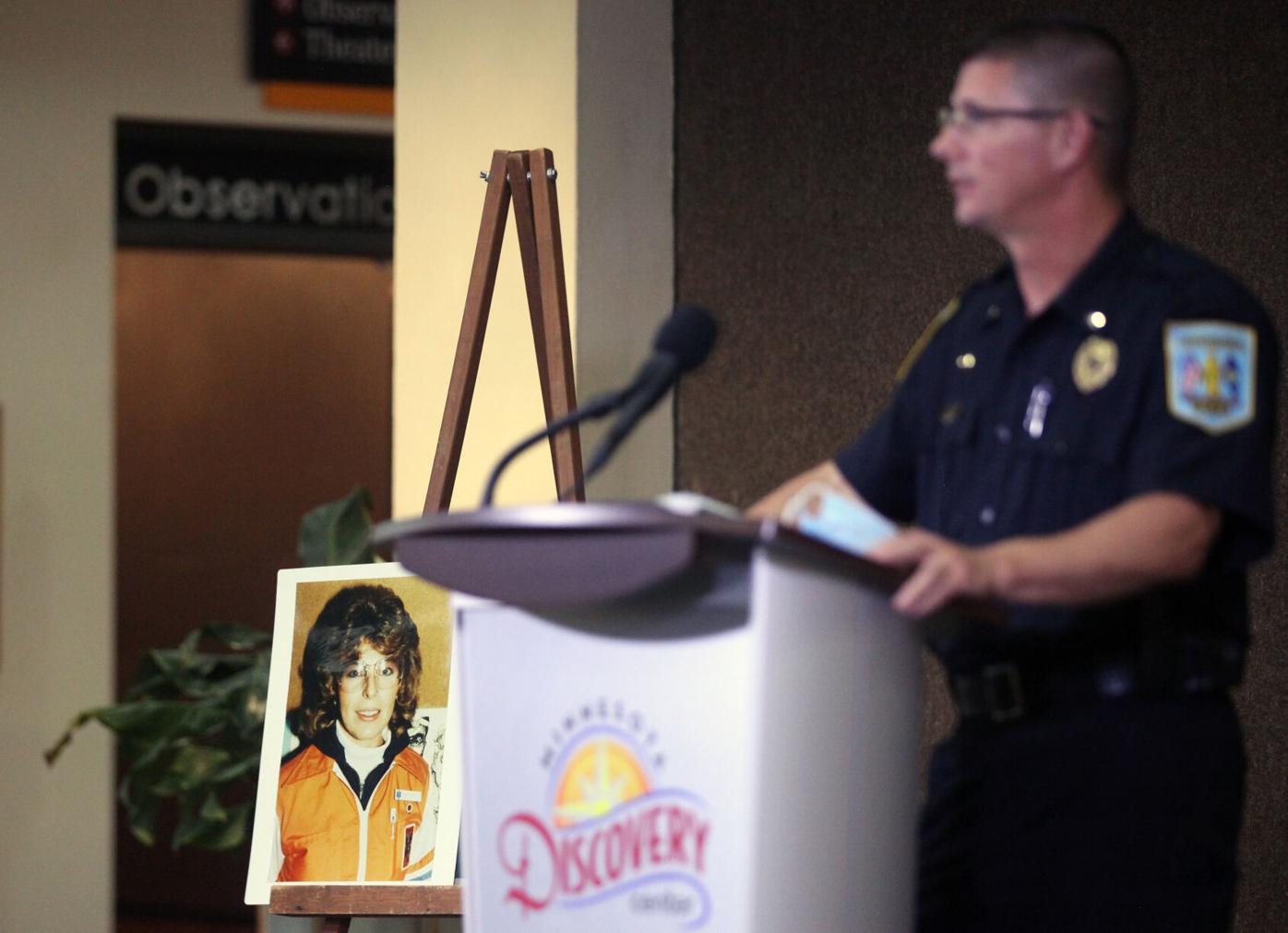 Chisholm Police Chief Vern Manner speaks about an arrest made in the 34-year-old murder of Nancy Daugherty (pictured) during a press conference Wednesday at the Minnesota Discovery Center in Chisholm. (Jerry Burnes/Mesabi Tribune)

But then on Wednesday, the Chisholm Police Department and the state Bureau of Criminal Apprehension received word from state labs that they made a breakthrough thanks to advances in DNA testing and tireless police work.

The news culminated with Chisholm Police Chief Vern Manner announcing on Wednesday evening the arrest of Michael Allan Carbo Jr., for the sexual assault and murder of Daugherty, who was a 38-year-old mother of two.

“This is a day Nancy Daugherty’s family and all of Chisholm have waited for for over 34 years,” Manner said at a news conference at the Minnesota Discovery Center in Chisholm. “We are truly gratified to provide some answers to Nancy’s family about what happened and after all these years to take a killer off our streets.”

In the small city of Chisholm, Daugherty worked as an aide at Heritage Manor Nursing Home and local ambulance service volunteer medical technician when she was last seen by a friend at 1 a.m. on July 16, 1986. The two discussed Daugherty’s plans to move down to the Twin Cities the following day to begin attending paramedic school.

But then her body — nude and revealing evidence of her being beaten, sexually assaulted and strangled — was discovered at 3 pm. the same day in the bedroom of her home by Chisholm police officers. There were signs of a struggle both outside and inside the home and witnesses later reported hearing a woman scream in the early morning hours.

The cold case languished until the summer of 2002 when the BCA’s Cold Case unit, along with the Chisholm Police Department and the St. Louis County Sheriff’s Office reopened it due to improvement of technology that could be helpful in examining DNA samples. “We want this case ‘alive’ again,” BCA Special Agent Randy Stricker had told the Associated Press. “Sometimes, in hashing it over, folks remember things that no one mentioned at the time, and we want to hear those details.” At the time, the police department was offering up to $10,000 for information leading to the arrest and conviction of the person responsible for Daugherty’s death.

Then in 2006, the Chisholm Police Department and the state BCA held a news conference to shed new light on the investigation after 20 years and to remind the public of the reward available. The case was featured on the Spotlight on Crime program, which increased the reward to $50,000.

Scott Erickson, then the Chisholm police chief, said that the “case had not only been frustrating for the family, but for law enforcement as well,” according to reporting at the time by the Hibbing Daily Tribune.

Investigators on Wednesday recalled that two parties had reported hearing a disturbance at or near Daugherty’s home at about 3 a.m. that day but did not see anyone. Later that morning, a friend of hers stopped by the home to help her pack up for her move to the Cities, but no one answered the door. After several unanswered visits, the unnamed friend called law enforcement to conduct a welfare check.

They would discover her body and a medical examiner later reported that she died between 3 and 5 a.m.

Gina Haggard, the daughter of Daugherty, appeared at the press conference Wednesday, joined by her husband, David. Manner read from a written tribute Haggard wrote, noting she was “elated” but that it was “difficult to speak about her mother.”

She recalled a trip to Alaska when Daugherty pulled over to help accident victims until they were airlifted from the scene to a hospital.

“She took care of her family as well. Everyone that knew her would say the same,” Haggard wrote, describing how her mother missed graduations, her wedding and the birth of grandchildren. “She was happy, loved to take care of people and loved her family. So many tears and struggles. She has missed so much. I miss her love and guidance.”

She also thanked law enforcement and the media for helping keep her mother’s case alive, saying “after 30-plus years, I had to start wondering if I would ever know … my mom can rest now.”

Investigators in 2006 suggested that the killer was an old friend or acquaintance, but Manner said Wednesday he was not aware of a connection between the suspect and Daugherty, and this was the first time Carbo entered the investigation.

BCA agents and Chisholm police investigators now say they were able to collect a full DNA suspect profile from bodily fluids found on Daugherty at the scene but the evidence did not match anyone in the criminal database. In more than three decades since, investigators interviewed and collected DNA samples from more than 100 people and conducted case reviews but none led to a solid lead in the case and no matches.

Earlier this year, the Chisholm Police Department approached the BCA with the idea to provide a sample of the DNA evidence to Parabon, a Virginia-based company analyzing public genealogy databases including enforcement programs to generate leads in cases. The BCA lab coordinated with the company to provide a DNA sample and Parabon in July identified Carbo as a potential suspect in the case.

At the press conference Wednesday, Manner said he had “decided to pursue genetic genealogy as a way to possibly generate new leads in the case.”

Last week, BCA agents and Chisholm investigators began surveillance of Carbo and surreptitiously collected DNA evidence that they sent to state labs for analysis. On Monday, the BCA lab in St. Paul reported a match to the bodily fluids found on Daugherty. Then on Wednesday, agents took Carbo’s DNA sample with his consent and later that day the lab reported that it was indeed a match.

Carbo, 52, was arrested on probable cause of second-degree murder on Wednesday and booked that evening into the St. Louis County Jail in Virginia.

St. Louis County Assistant Attorney Karl Sundquist has been assigned to prosecute the case. He is expected to work with Assistant County Attorney Christopher Florey.

Sundquist, who was recently appointed to head of the Iron Range Division, gave his condolences to the Daugherty family and expressed his “appreciation for the unwavering dedication of all the law enforcement agencies that throughout the years have been involved in this case to get it to where it is now.” He announced that it was “the County Attorney Office’s “intent to file charges for second-degree intentional murder.”

“Our condolences go out to Nancy Daugherty’s family,” said St Louis County Attorney Mark Rubin, who worked on the original investigation, in a news release Wednesday evening. “This is a phenomenal example of perseverance and cooperation between law enforcement and our office.”

It was not clear if Carbo had obtained a lawyer.

Standing beside BCA agents and prosecutors, Manner said at the press conference that “some of our officers have worked this case their entire careers and I am grateful for their efforts.” He also thanked the state agency and additional law enforcement agencies “that continue to work this case for more than three decades.”

Evans, the BCA superintendent, added his gratitude for the state agents and the Chisholm police officers who he noted “never gave up on this case,” in addition to the St. Louis County Sheriffs and Attorney’s offices that “worked collectively together on this case to pursue leads on this investigation and to really search for the person who was responsible for Nancy’s death so many years ago.”