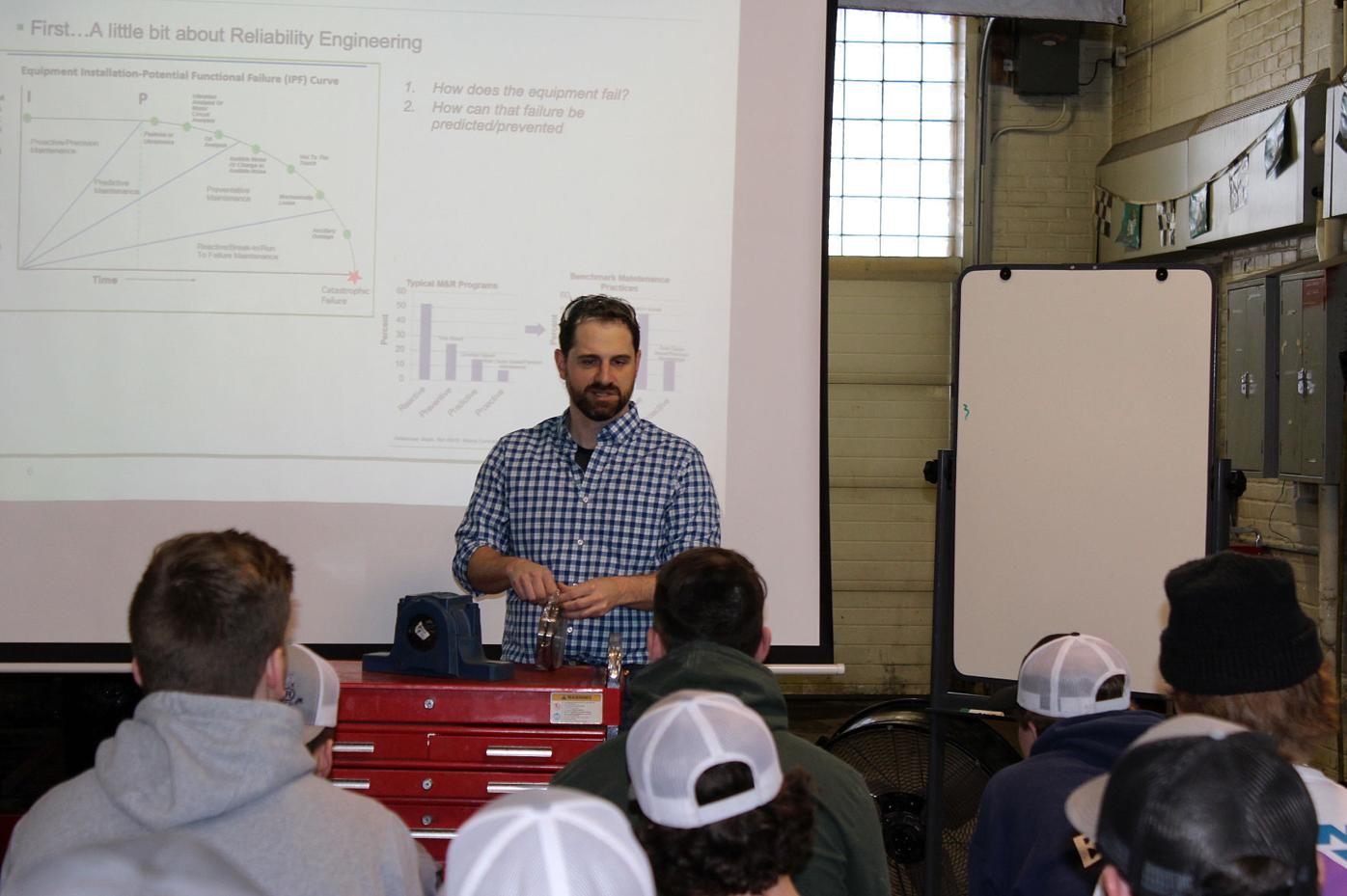 Daniel Lerick, a 1999 Hibbing High School graduate, presents to a cross section of industrial students at HHS on the importance of preventative maintenance in January. 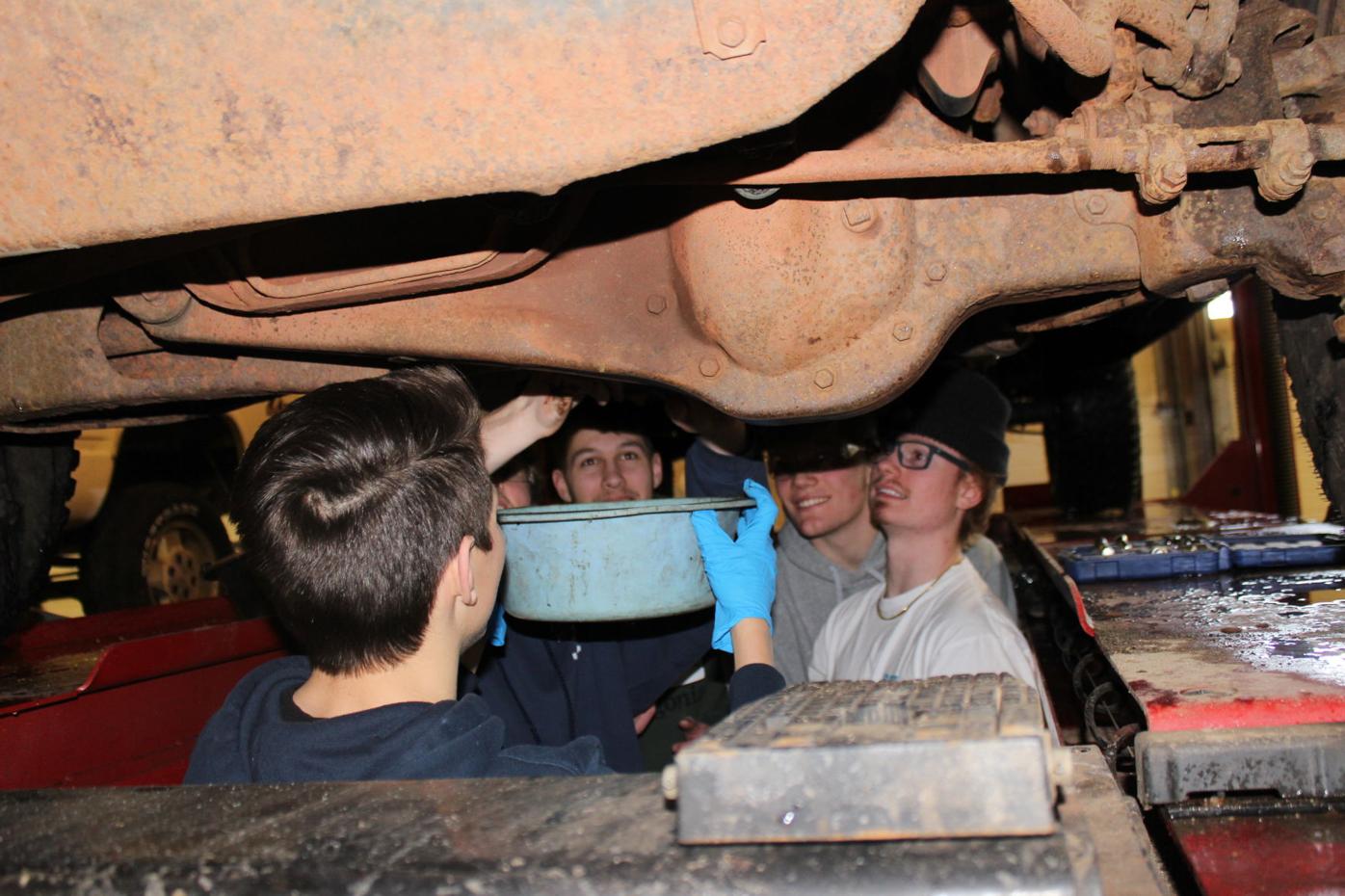 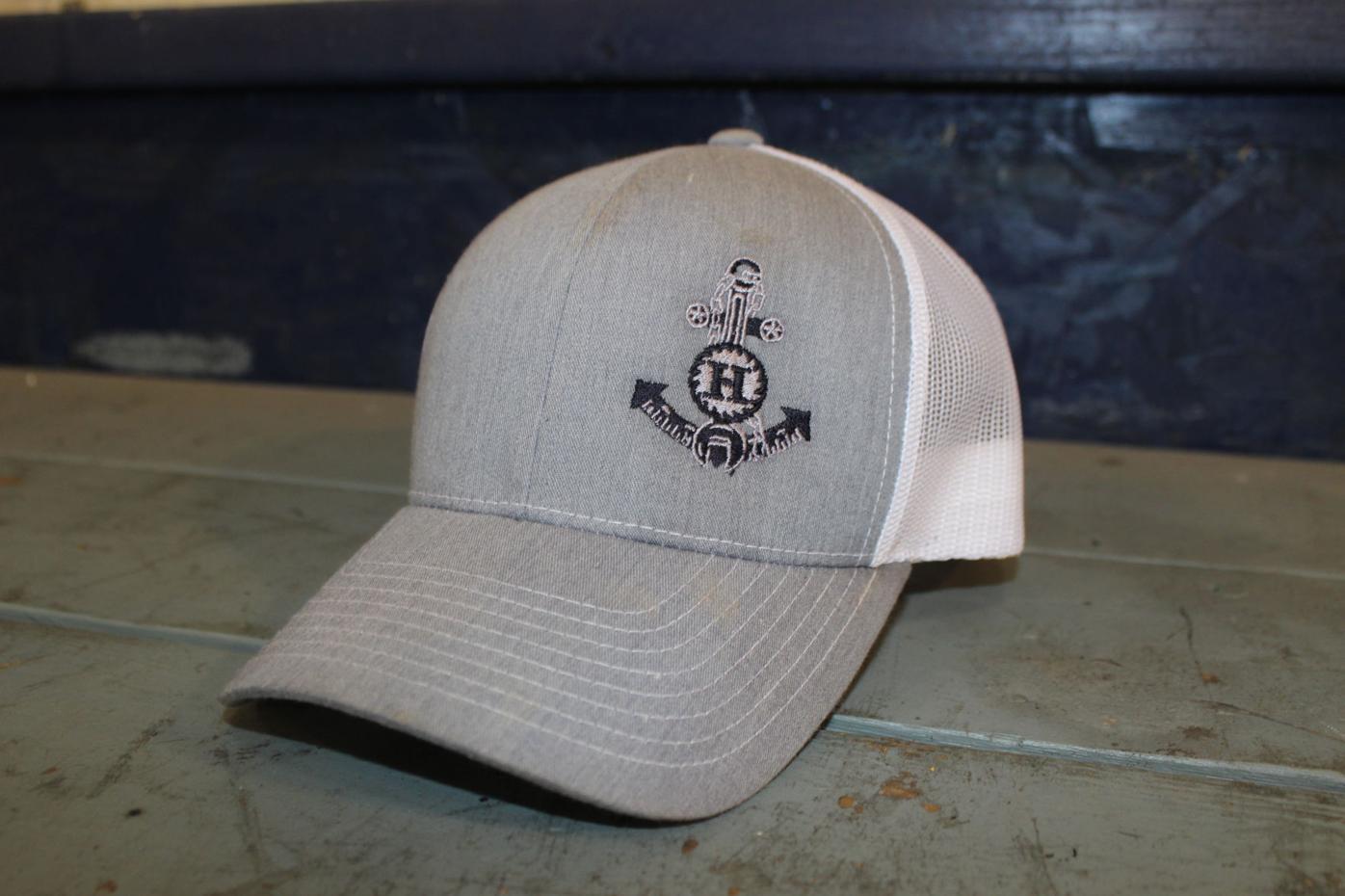 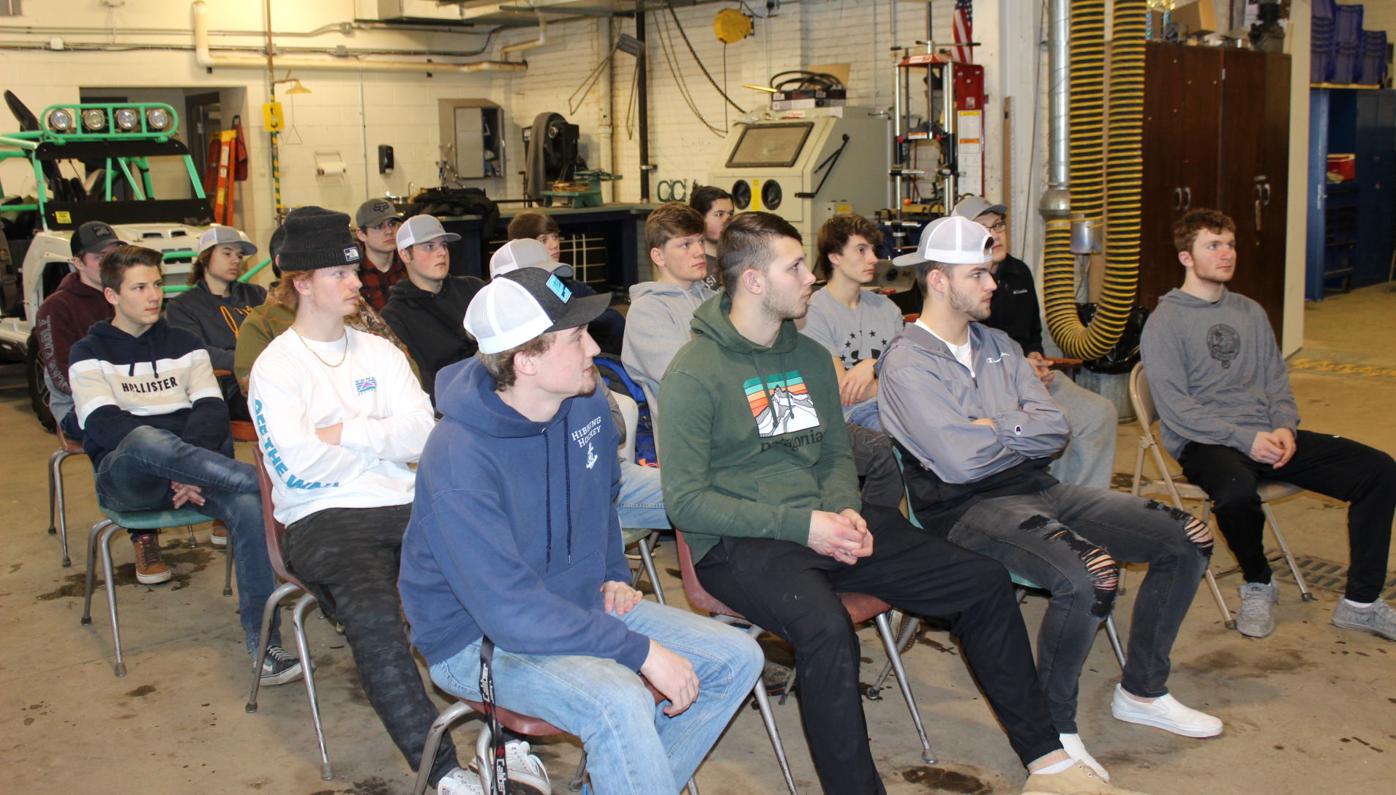 Students with interests in chemistry, engineering and automotive listen to a presentation from a UTAC representative last month to learn how skills learned now can benefit them in future careers. 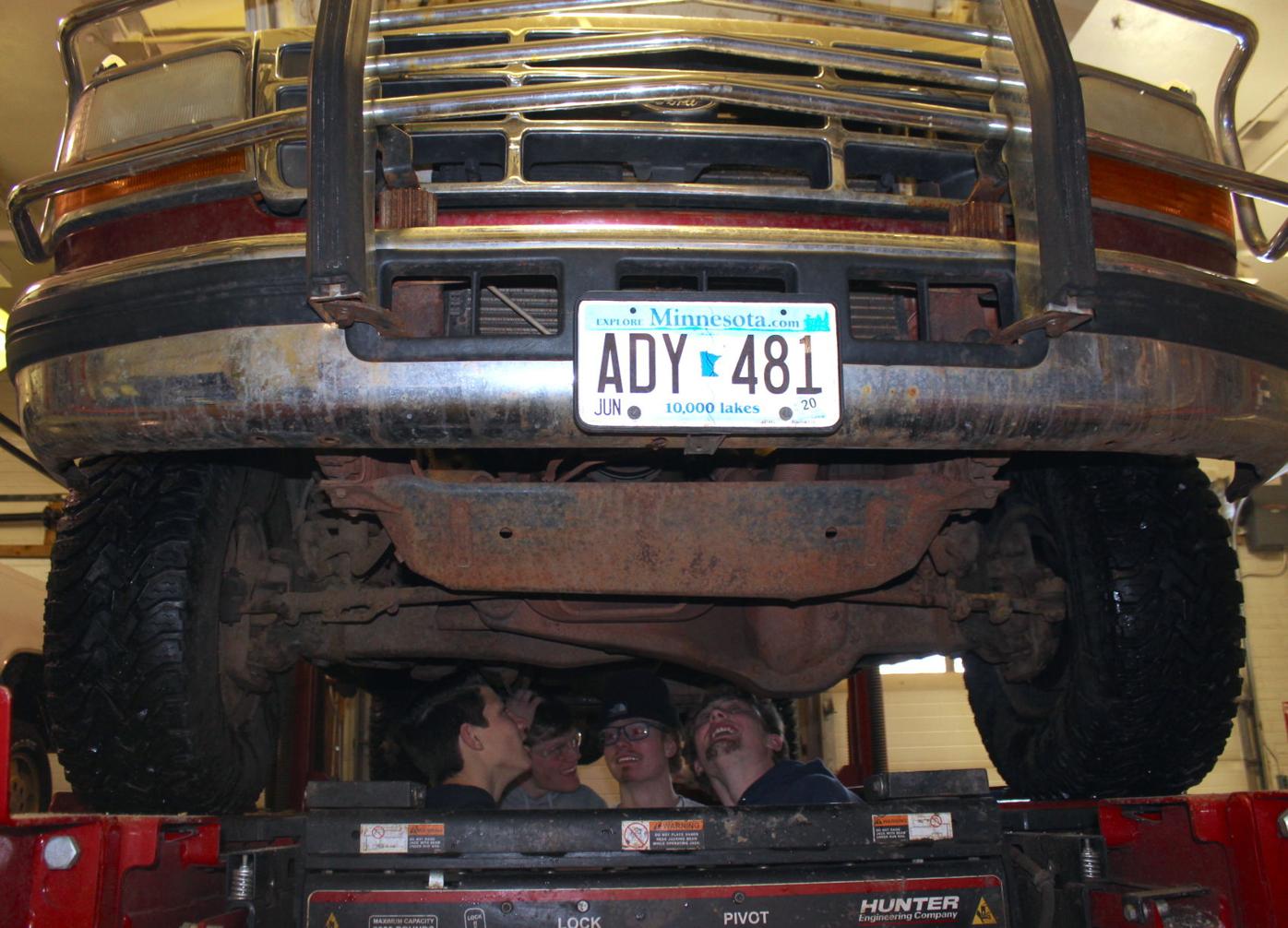 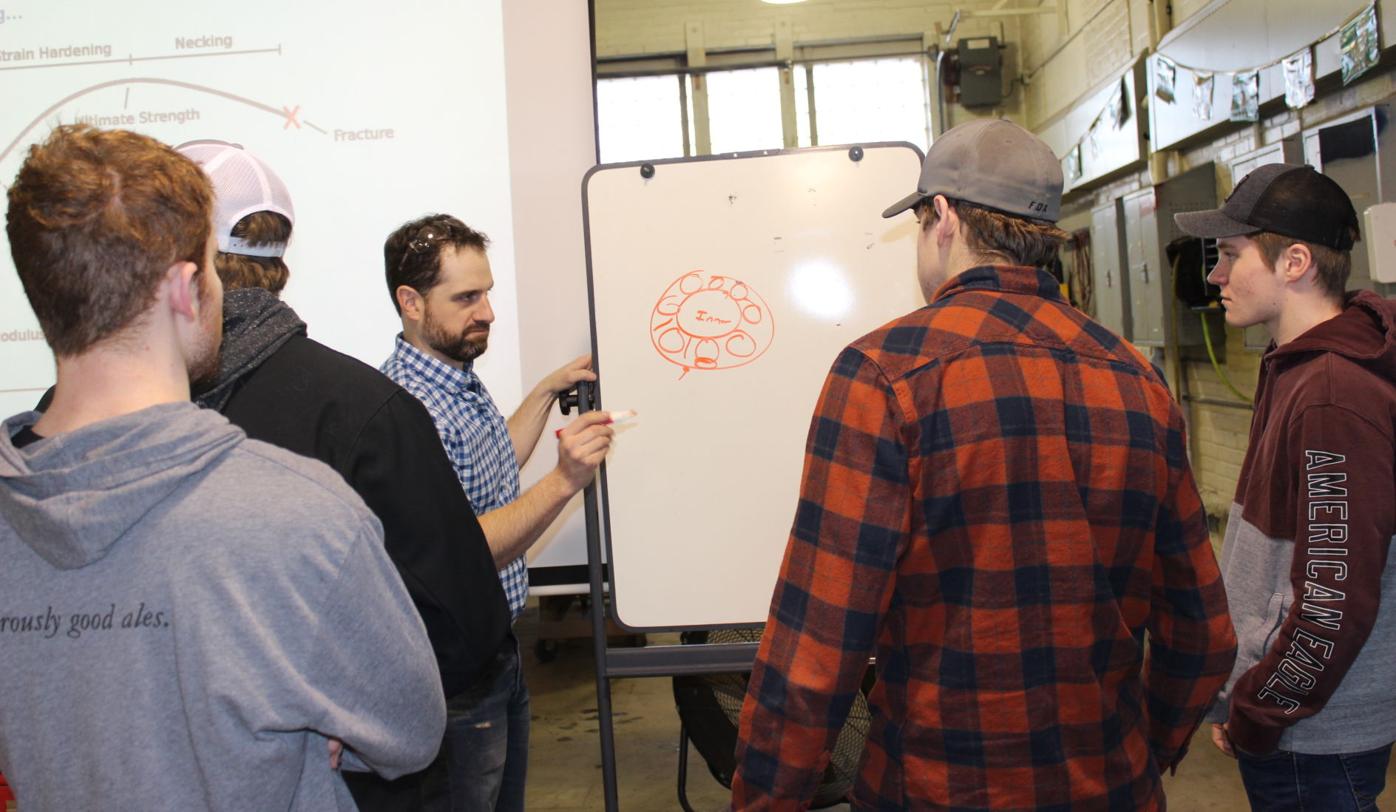 Dan Lerick answers all the burning questions students have on oil.

Daniel Lerick, a 1999 Hibbing High School graduate, presents to a cross section of industrial students at HHS on the importance of preventative maintenance in January.

Students with interests in chemistry, engineering and automotive listen to a presentation from a UTAC representative last month to learn how skills learned now can benefit them in future careers.

Dan Lerick answers all the burning questions students have on oil.

HIBBING — “The biggest benefit to your career is going to be taking a class like this, especially if you’re going into engineering. That hands-on stuff is very beneficial.”

Daniel Lerick of United Taconite, Cleveland-Cliffs, Inc. returned to his alma mater last month to impart the importance of predictive maintenance to a cross section of Hibbing High School students interested in automotive, engineering and chemistry. More than that, Lerick’s passion for his field translated into a deeper lesson about fostering an unending curiosity.

Mikal Brown, president of the Bluejacket Career Academies, observed from the back of the auto shop as Lerick’s presentation got underway. Brown said he was particularly pleased that mixed group, each with different career goals, would hear how the lessons learned within the industrial classrooms could translate into valuable real world experiences.

“The hope would be to have them see how three different areas of expertise are needed in the field of predictive maintenance,” Mikal Brown said. “I think it’s important to have Hibbing graduates come in, speaking to Hibbing graduates in a classroom, so these kids can see that ‘Whatever I want to do, to find my passion and run with it, there are all kinds of post-secondary options.’”

Lerick, a 1999 HHS graduate, opened the presentation by sharing a bit about his educational background. Lerick attended the University of North Dakota for two years before transferring to the University of Minnesota, where he graduated in 2004 with a degree in mechanical engineering. He lived in the Twin Cities, working for a plastics company, and in 2006, he returned to his hometown, where he purchased his first house and accepted a position at Hibbing Taconite. Lerick worked his way up through a variety of positions over the years — mechanical engineer, operating supervisor, maintenance supervisor, reliability engineer — until settling into management in 2012. Then in 2014, he transferred to United Taconite, where he remains today.

Lerick challenged the group to discover where their interests and talents lie by getting their hands dirty and exploring various aspects of the different trades now while they’re young. Often times, he said, those experiences will prove invaluable later on. “What really amazes me is not how much I’ve learned on the engineering side but how much I’ve learned on the trades side — how things are actually done,” he said.

Cleveland-Cliffs, which has been in mining for over 170 years, currently employs approximately 2,300 people. Lerick touched on the different processes they use for making steel and what that steel is used for — from beams to automotive frames — noting that much of what is used comes out of ground here in northern Minnesota as well as Michigan. Next, he spoke on the topic of reliability engineering and oil analysis, leaning on his expertise in the area of industrial lubrication.

“Basically, we try to understand why equipment breaks,” Lerick said. “... And how can that failure be predicted or prevented.”

On a screen behind him, he pointed to a curve graph titled, “Equipment Installation Potential Functional Failure.” He noted that the cost for equipment failure is double when factoring parts and down time.

“This is about correcting things before equipment gets damaged,” Lerick said. “No one wants to get called into work during the weekend. It’s about proactive, precision maintenance.”

As Lerick explained the cost of “reactive maintenance,” the group of 20 listened on, many wearing hats that students in the graphics design program made.

AJ Abate, a HHS industrial technology teacher who was once a classmate of Lerick’s, remarked that the creation of the hat’s logo — which features a wrench, sawblade, ruler and gears — represents the kind of creativity and initiative that the Career Academy program hopes to inspire. “The Bluejacket anchor is specific to the trades and the kids really took to it,” Abate said.

The Career Academy kicked off for the first time this past fall in Hibbing. The aim is to equip area students with job skills while still in high school and give a leg-up on the competition in post-graduate employment. The program offers those in grades 9-12 the option of choosing between different “academies” specializing in engineering technologies, health, building and trades, engineering, education and childcare, or performing arts and communication. Each academy helps to develop basic and technical skills — even providing certifications in some cases.

Brown, who oversees the Career Academy program, said he especially likes having Hibbing graduates return to the classroom as community partners. It’s a way of showing the students that they can make a difference right where they live while pursuing a fruitful career.

“The kids that are destined to go to four-year schools, let’s still help push them down that path, but that’s not the path for everybody,” Brown said. “And in a group like this, it’s really important for the kids to see that there are a lot of different post-secondary educations that work.”

He continued, “You’ve got the four-year-plus engineer in the room showing what needs to get done, but you might have a mechanic who just went right to work right out of high school — that was their post-secondary education: it was work. I think that’s the vital piece of where we’re at with the program and what we hope to do.”

To Brown, seeing the students’ engagement throughout Lerick’s visit spoke volumes. Behind him, the class had broken into small groups. Several were draining oil from trucks suspended high in the shop while another group huddled around Lerick, drilling him with questions about oil: How long do you wait to change oil? What kind do you use? Can you really reuse it?

Nathan Bennett, a senior at HHS, was busy helping his cohorts inspect truck oil nearby. He said he enlisted in the U.S. Navy and is set to leave on Sept. 15. In the meantime, he’s taking the automotive class because he wanted to learn “decent life skills” before graduation. His ah-ha moment during Lerick’s presentation was “learning you can actually reuse the oil and filter it through — that was pretty cool.”

“This is huge,” Brown said, overlooking the group. “It’s great for learning. It’s not your tradition to sit down at a desk in a classroom learning.”

Which, he said, is the entire point of Career Academies. It’s meant to cater to students with different learning styles while bolstering chances of future success. It also challenges the traditional narrative of what high school education can be about, and having community partners is important for showing that there are many different paths available.

“Let’s really evaluate what kids want and are capable of doing versus just forcing them into what we think is best for them,” Brown said.