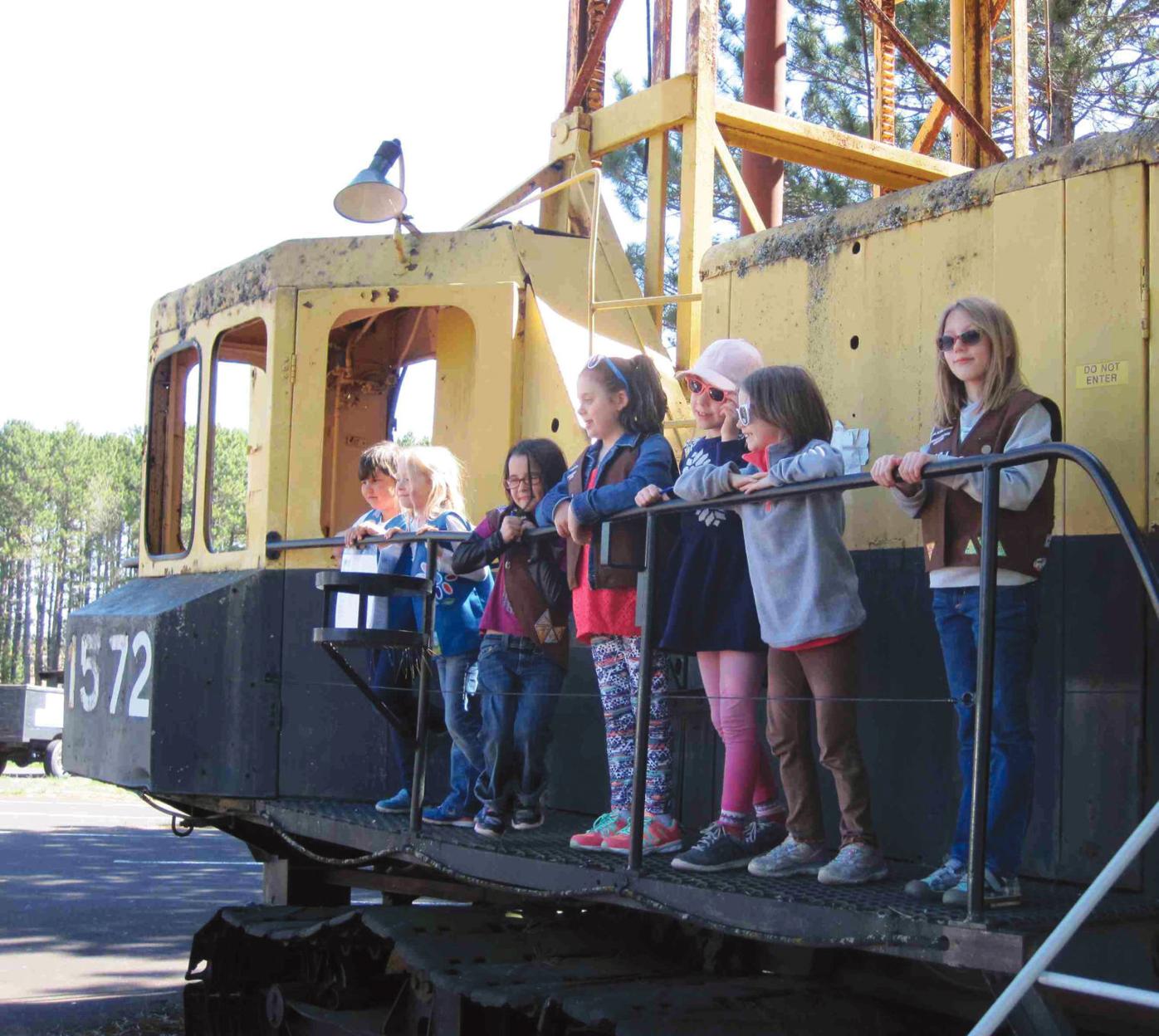 A small group of Girl Scouts stand on some of the heavy mining equipment on display at the Minnesota Museum of Mining during the Minnesota Section of the Society of Mining, Metallurgy and Exploration’s (SME) inaugural Exploring Mining and Engineering Day. 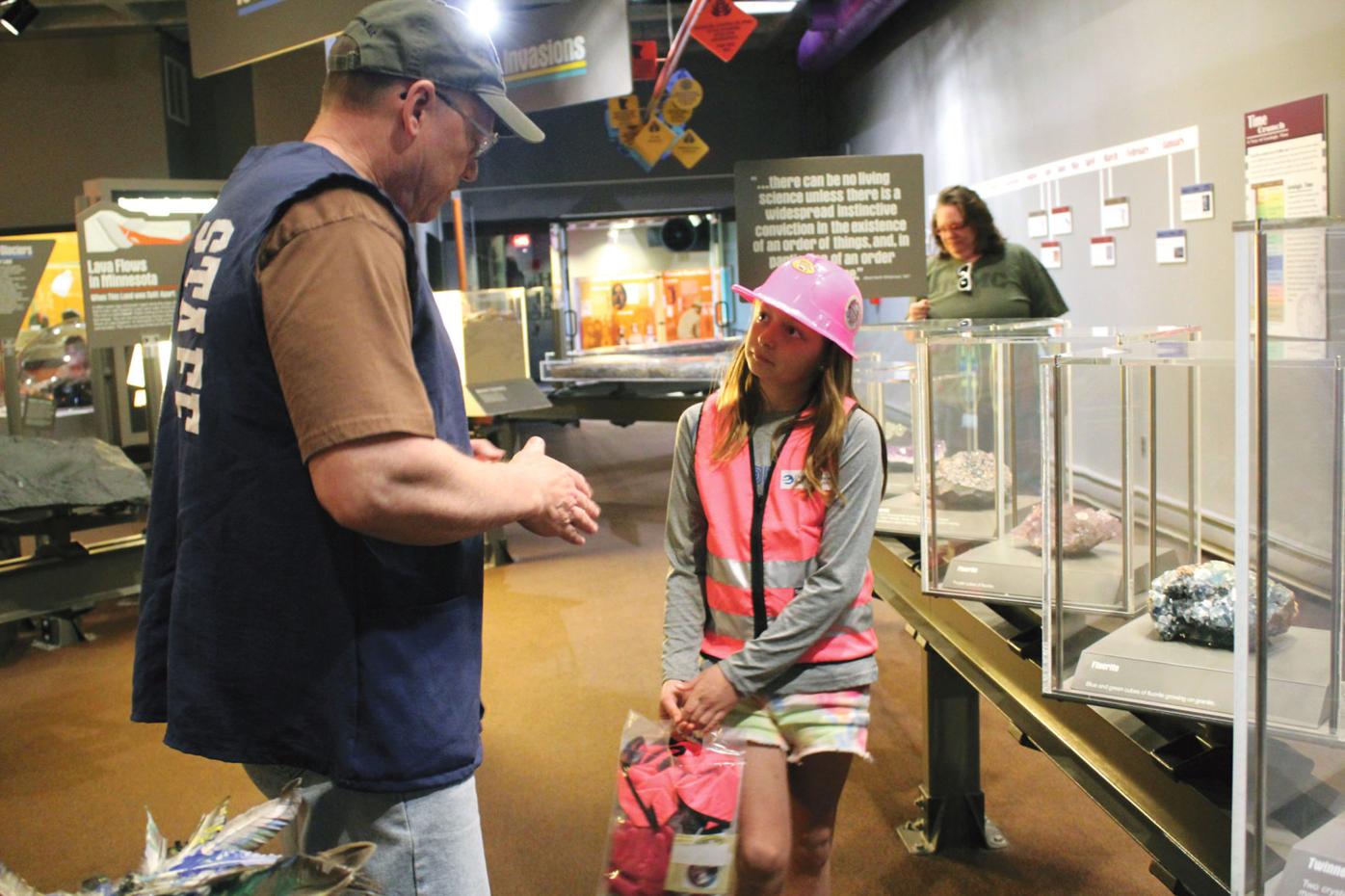 A young Girl Scout is all ears about various rocks and the mining process while in Geology Hall at Minnesota Discovery Center during the Minnesota Section of the Society of Mining, Metallurgy and Exploration’s (SME) inaugural Exploring Mining and Engineering Day. 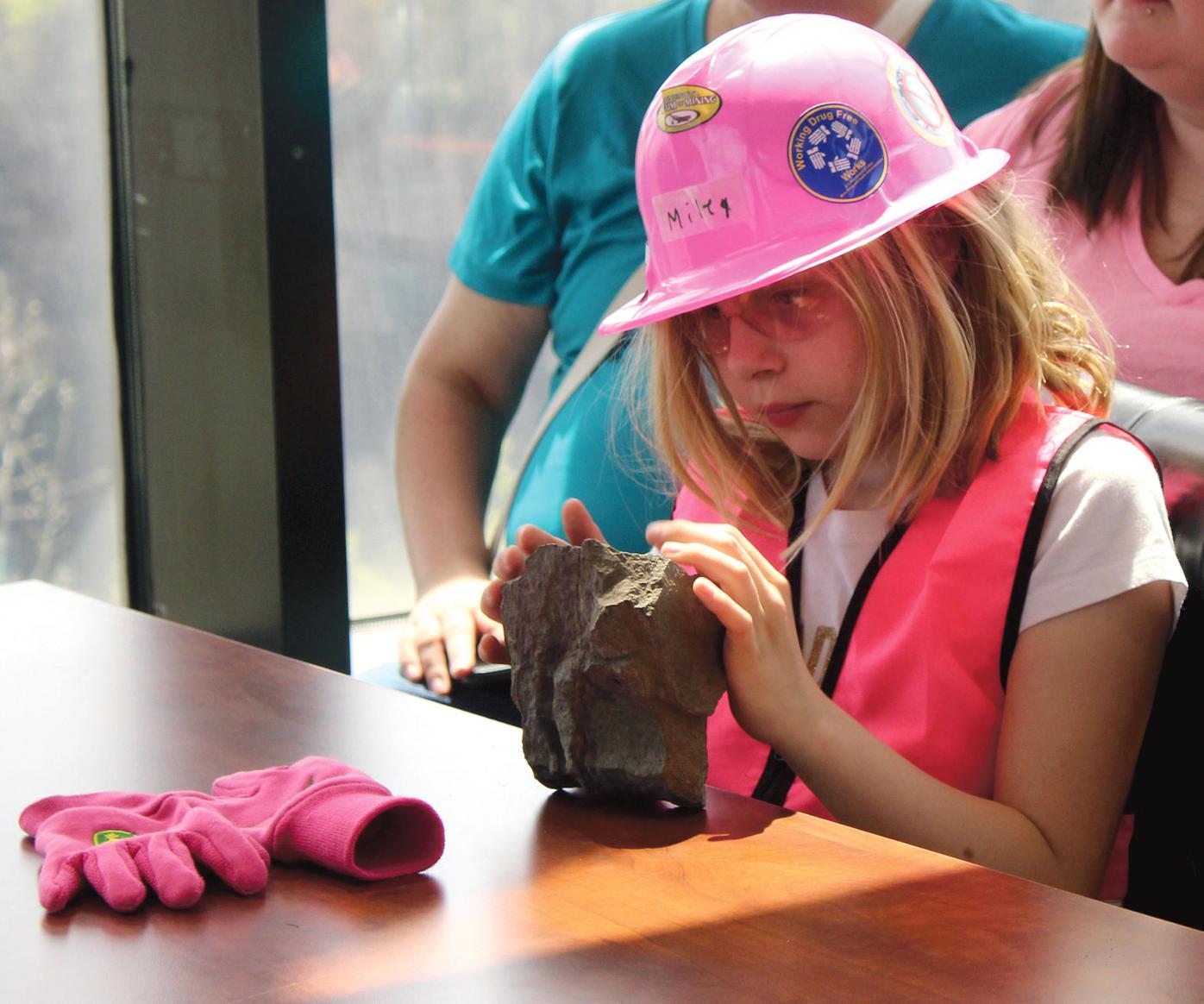 Donning her pink hard hat, a young Girl Scout checks out a piece of rock mined from a local pit. 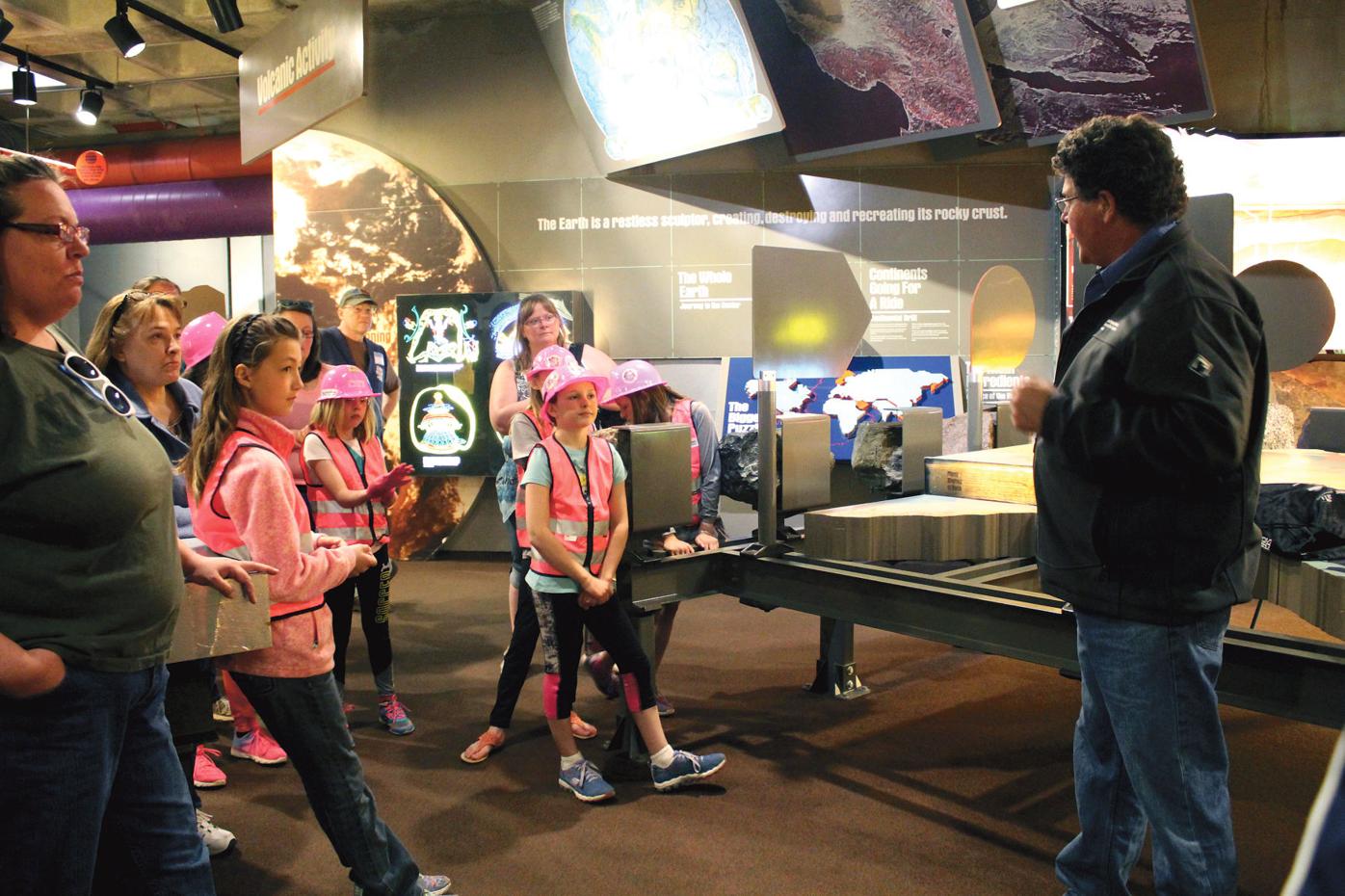 A group of Girl Scouts learn more about the geologic landscape of the Range while in Geology Hall at Minnesota Discovery Center during the Minnesota Section of the Society of Mining, Metallurgy and Exploration’s (SME) inaugural Exploring Mining and Engineering Day. 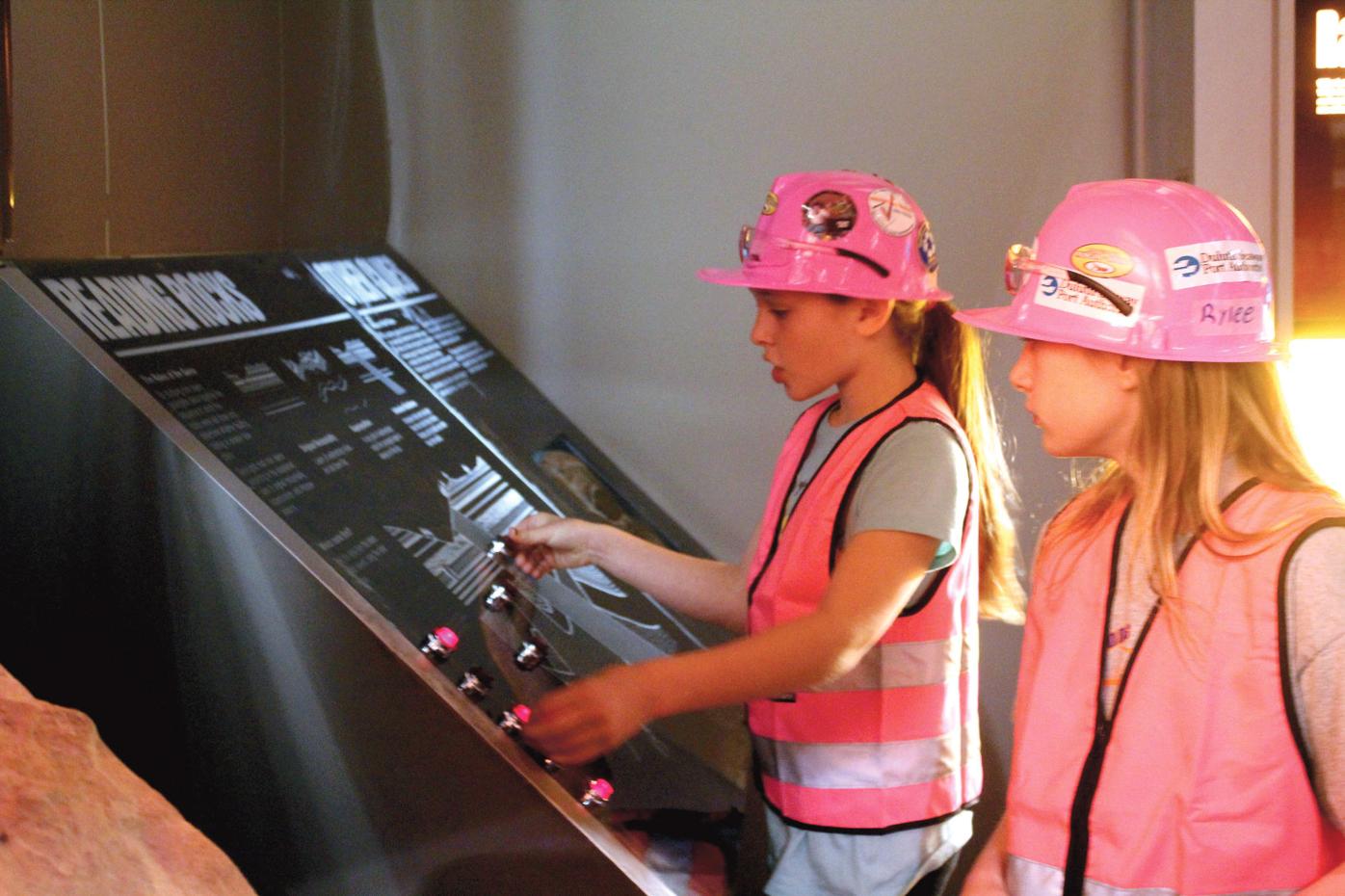 Two Girl Scouts play with a interactive station called “Reading Rocks” while at Minnesota Discovery Center during the Minnesota Section of the Society of Mining, Metallurgy and Exploration’s (SME) inaugural Exploring Mining and Engineering Day.

A small group of Girl Scouts stand on some of the heavy mining equipment on display at the Minnesota Museum of Mining during the Minnesota Section of the Society of Mining, Metallurgy and Exploration’s (SME) inaugural Exploring Mining and Engineering Day.

A young Girl Scout is all ears about various rocks and the mining process while in Geology Hall at Minnesota Discovery Center during the Minnesota Section of the Society of Mining, Metallurgy and Exploration’s (SME) inaugural Exploring Mining and Engineering Day.

Donning her pink hard hat, a young Girl Scout checks out a piece of rock mined from a local pit.

A group of Girl Scouts learn more about the geologic landscape of the Range while in Geology Hall at Minnesota Discovery Center during the Minnesota Section of the Society of Mining, Metallurgy and Exploration’s (SME) inaugural Exploring Mining and Engineering Day.

Two Girl Scouts play with a interactive station called “Reading Rocks” while at Minnesota Discovery Center during the Minnesota Section of the Society of Mining, Metallurgy and Exploration’s (SME) inaugural Exploring Mining and Engineering Day.

CHISHOLM — With a toothpick in her right hand, the young Girl Scout had a tight grip on a Chips Ahoy chocolate chip cookie in her left hand.

She chipped at, poked, stabbed and dug out parts of the cookie.

To “mine” a chocolate chip from the hardened batter.

The hands-on, cookie challenge was one of several activities Girl Scouts from around the state engaged in during the Northern Minnesota Subsection of the Society of Mining, Metallurgy and Exploration’s (SME) inaugural Girl Scout Exploring Mining and Engineering Day.

SME organized and hosted the exploration day for the Girl Scouts Lakes & Pines Council. It was the first time SME offered the day to the Girl Scouts. It has been conducted for a Boy Scouts council in the past.

“Our first experience of this with the Girl Scouts was a positive one,” said Julie Marinucci, an SME member and event organizer. “We had a great response from around the state, which was nice to see. We like that type of engagement from people across the state.”

The local backup was also strong.

“We also had good support from our industry partners — in terms of volunteers, donations, gifts for the girls and grant dollars,” she said. “All of it helped make the event successful, and allowed us to go above and beyond in some areas. All in all, it was a good day.”

The event was made possible by a local SME section grant with support from the Minnesota Section, Iron Mining Association, Duluth Port Authority, PolyMet Mining, Minnesota Ore Operations and many volunteers.

Approximately 40 scouts participated, and with them came around 30 adults, be they troop leaders or parents.

The May event was held at two key mining locations — the Museum of Mining and Minnesota Discovery Center (MDC), both located in Chisholm.

“We have used both locations before, and we’re fortunate to have these types of facilities to tell the story of mining in the region,” said Marinucci. “The story not only of the history of mining, but also the future of the industry as well.”

SME is a professional society whose members represent all professions serving the mining, minerals and underground construction industries. Part of SMEs mission is educational outreach and development of future workforce.

“We’re looking to that next generation, and want to give them insight,” said Marinucci. “Events like this provide great exposure and education about the industry, why it’s important and how it could make for a great career choice down the line.”

Girl Scout Exploring Mining and Engineering Day was filled with behind-the-scenes insight and was led by working geologists, environmental scientists and engineers.

The fun began at the Museum of Mining with a welcome from Chisholm Mayor MaryJo Rahja.

The scouts then listened to an industry overview by Kelsey Johnson, president of the Iron Mining Association (IMA). She stressed the need for mining and spoke about various careers in the industry.

The scouts then headed to the Safety Gear Photo Booth, where they discussed the importance of safety both in the mine and at home. Each scout was outfitted with safety gear, including a hot pink safety vest, glasses, work gloves, hearing protection and a hot pink play hard hat. They were also given stickers to dress up their hard hats.

“The ‘play’ hard hats and safety gear were things that could take home and use in their real lives,” noted Marinucci. “They could be used for a bike ride, walking or doing work in the garden. We also wanted to teach them about safety in general, and how it goes beyond just being safe at work.”

Once geared up, the scouts explored the museum grounds. They met up with SME Member Doug Learmont who led them through the Underground Mine. The station exposed the scouts to the history and future of underground mining in the region, mining methods and safety.

Learmont, who’s also a Minnesota Museum of Mining volunteer, is passionate about mining and relished teaching and sharing with the scouts.

“It was a really nice group of girls that came,” he said. “We enjoyed them, and the girls who came enjoyed the program.”

In addition to his devotion to the mining industry, Learmont said he was part of the event simply because it’s the right thing to do.

“I’ve also appreciated the education aspect of things like this with my own children when they were school-age,” he said.

After checking out the other mining-related equipment at the Museum of Mining, the scouts headed over to MDC for lunch and more lessons — lessons such as how a rock on the ground become the metal in their parent’s car and how a cell phone wouldn’t exist without mining.

Over in Geology Hall, volunteer Frank Pizzutto had a room of visuals and interactive displays as he clued the scouts in on various minerals and their uses. After listening to him, the scouts checked out the displays and explored the geologic landscape of the Range through MDC’s exhibits.

The hands-on fun continued just down the hallway in Taconite Square, where the cookie activity was in full swing. It was there the scouts had the chance to apply their new-found mining knowledge while mining for chocolate.

At the close of the day, each Girl Scout was awarded a Mining Badge, took the first trolley ride of the year and them headed home with a bag full of goodies from the event sponsors.

Troop 1228 Leader Emily Major accompanied four girls, including a daughter, at the event. The troop is a mix of Brownies and Juniors (third and fourth graders) from Virginia.

“As a troop leader, it was nice to be able to participate in a Girl Scout event that was right in our own backyard,” said Major, noting they often have to travel for scouting events. “I also thought this event would be interesting to the girls since they live in this area.”

Major enjoyed seeing the scouts process and explore throughout the day.

“It was neat to see their wheels turning quite a bit as they took in and digested the information,” she said. “It was pretty much decided where they’d go and what they’d do, but when given the chance to explore at the Mining Museum and Discovery Center, it was interesting to see what they gravitated toward.”

The scouts had a ton of fun at the safety booth, and were all wide-eyed and in giggle-mode as they climbed on the big mining equipment at both locations.

“As a mom, I thought it was very educational,” said Major. “Not a lot of people know what specifically goes on in mining. They know the Iron Range is synonymous with mining, but may not know the details. This day was informative, and really well geared toward the age levels that were there. It was presented in a way they could understand.”

The mining lessons likely hit home for this troop. Being from the Virginia area, all of the scouts’ family lives are most likely directly impacted by the mining industry, Major pointed out.

“A lot of their parents or family members work in the mines or work for a company that works for the mines. It’d be hard to find one who’s not affected,” she said. “Plus this all has to do with the history of where we live. It was educational and done in a fun way, and I’d definitely recommend it.”

Looking ahead, organizers are planning to host more Exploring Mining and Engineering Days in the future. The hope at this time is to alternate between offering it to the Girl Scouts and the Boy Scouts.

“But it will be a couple of years,” said Marinucci, adding they will wait for current ages to pass through as to reach a new age audience in the future.

Learmont concurred, adding he’d like see it offered once again.

“What I’ve heard has only been positive. Very positive,” he said. “And it’s something that we look forward to repeating again in a couple of years.”

And speaking of future, Marinucci is hoping that this day and its activities planted seeds in the scouts.

“If they took just one lesson, we would want it to be the importance of mining and the relevant, vital role the industry plays in our daily lives, in the state of Minnesota and globally,” she said. “And, secondary, that maybe mining is something they will consider as a career in the future.”

Learmont had similar comments, adding that those careers are good-paying and can be personally and professionally rewarding.

But for now, the duo are glad the event went well and that the message and story of the mining industry has reached a new audience.