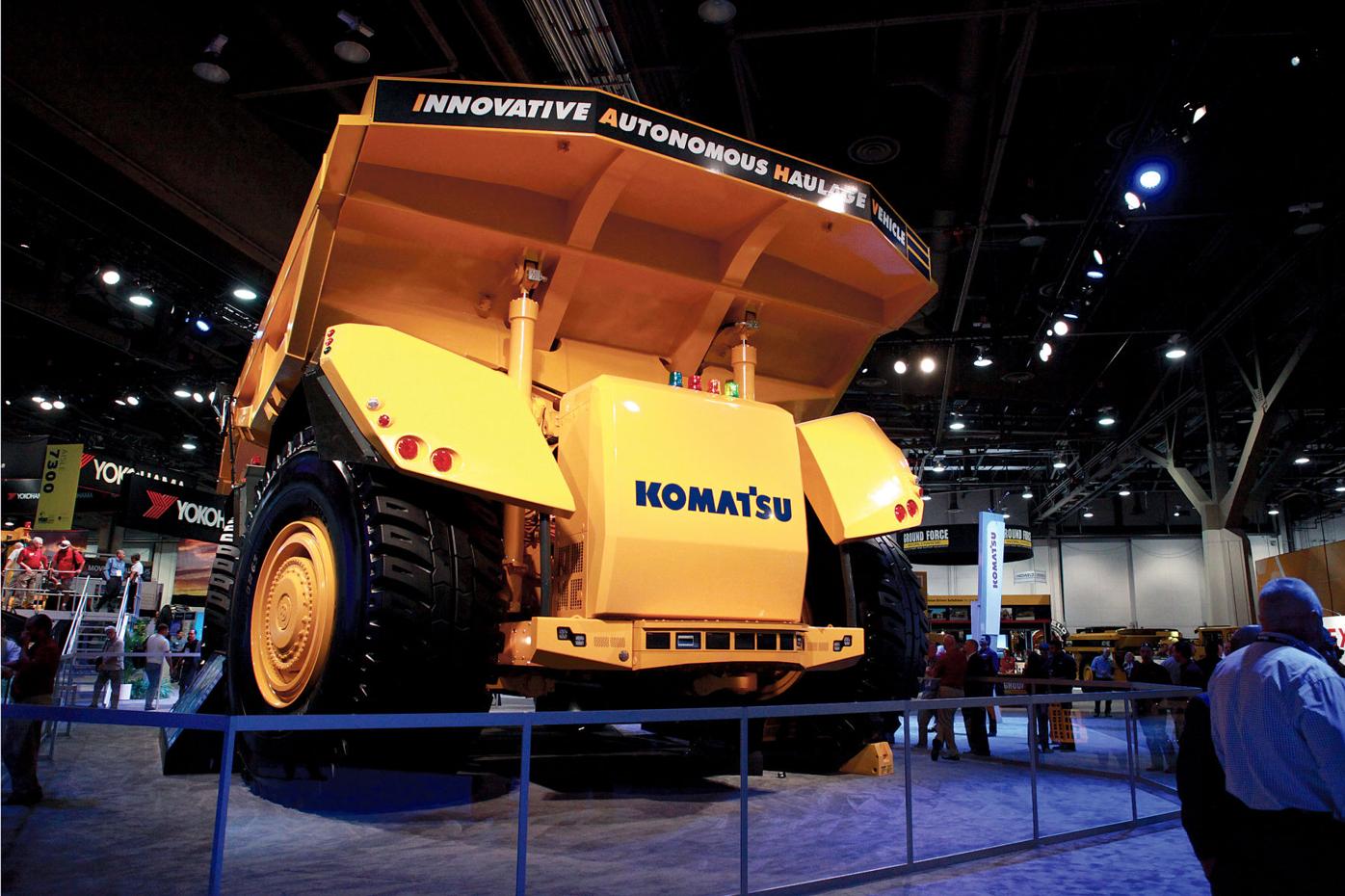 Komatsu’s Innovative Autonomous Haulage Vehicle, an unmanned cabless mining truck, was the star of the 2016 MINExpo International in Las Vegas. 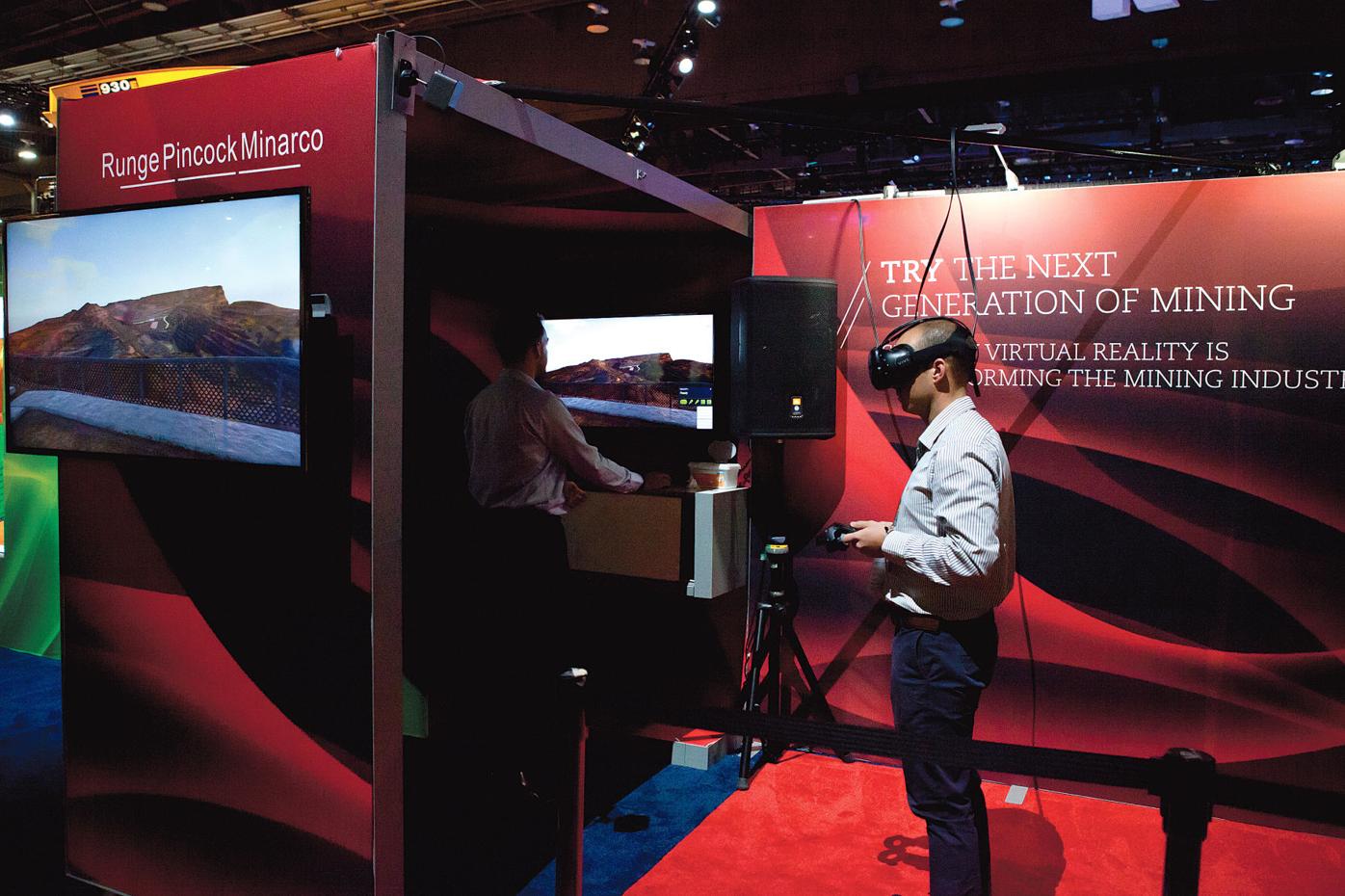 Virtual Reality training allows mining companies to acquaint employees to the site, equipment and duties without going in the field. Virtual Reality provides new fronts for the industry in training and safety.

Komatsu’s Innovative Autonomous Haulage Vehicle, an unmanned cabless mining truck, was the star of the 2016 MINExpo International in Las Vegas.

Virtual Reality training allows mining companies to acquaint employees to the site, equipment and duties without going in the field. Virtual Reality provides new fronts for the industry in training and safety.

LAS VEGAS — Everything today seems to have some level of automation, and it’s not just in the factories anymore.

Automation is infiltrating ours lives from all angles: Amazon can deliver your order by drone, news agencies are using it to write stories, and Tesla is one of many companies working on cars that will drive for you.

The little things, like phone apps to start our cars, adjust our home heating and the volume of our hearing aids are expected out of products today. We want it faster, easier and effortless.

Now imagine a 416 metric ton mining truck, capable of carrying half its weight in iron ore, straddling a 2,700 horsepower engine that’s able to hit about 40 miles per hour roaming around a mine pit — without a driver.

If Tesla’s self-driving car experiment was a big deal, Komatsu’s latest venture is big in both size and imagination when considering autonomous technology.

Komatsu’s Innovative Autonomous Haulage Vehicle is unlike past models of the company’s autonomous efforts. It is completely unmanned and designed without a cab.

From a design standpoint, weight is distributed to the hauler’s four tires equally, allowing to travel in forward and reverse directions utilizing four-wheel drive and steering. The engine is placed in the center of the vehicle, allowing the payload to help balance weight distribution when the truck is fully-loaded.

“It allows us to have control over each wheel independently to control traction and braking in whatever condition we find the machine,” said Don Lindell, director of international sales development Australia for Komatsu.

The Front Runner automation system is 10 years in the making, first commercialized as the Autonomous Haulage System in 2008, moving more than 1 billion tons of minerals in Chile and Australia since.

At the 2016 MINExpo International in Las Vegas, the Innovative Autonomous Haulage Vehicle was the talk of the show. And how couldn’t it be? More than 400 metric tons of steel, wires and tires without a place for a driver was right there in the flesh.

When not driving according to a mine plan, the Innovative Autonomous Haulage Vehicle is connected by a wire to a joystick familiar to any video gamer from Atari to PlayStation. From there it can move forward, backward and turned from the palm of someone’s hands, which is exactly how Komatsu moved the truck and in out of the Las Vegas Convention Center.

Lindell said this is the first machine made exclusively for autonomous use, and is designed to provide a cost benefit for mining companies.

Here’s how: The trucks only perform as designed by the company and mining company for specific uses. Without a human in control the speed and braking systems don’t vary, according to Lindell, meaning the hauler won’t brake hard or run fast in everyday conditions.

The truck also has improved driving ability and agility to handle different road and weather conditions, as well as confined spaces that are challenging to navigate.

So when will the full-autonomous vehicles be at a mine site?

“Mining is an activity that is not really prone to automation at this point, but never say never,” he said. “I’m not seeing anything in the long term that will replace the man with automation anytime soon.”

Goncalves believes the worker is here to stay on Iron Range for multitude of reasons.

For starters, the biggest cost to mines isn’t the workforce, rather rising energy costs to keep the plants firing. In places like Australia, that isn’t the case. Wages become a huge expense, and that isn’t a good starting point to shed real people on the job, he said.

Financially, Goncalves says, those countries aren’t getting the bang for the buck.

Sticking with workers, there’s also a certain level of comfort mining owners and managers have in people over machines. People can anticipate problems and react, and since these trucks aren’t bearing artificial intelligence, they can’t change operations when a new situation pops up on the spot.

That isn’t to say automation is all bad, he adds, noting the precision in life and death situations is a plus for computers. But mining has more immediate decisions than precision-based deadly ones.

“I like my people, I like to employ my people and I like people to make decisions in the field,” Goncalves said. “I haven’t seen anything in automation to me excited … You are not going to see us using automation in our mines.”

Another reason the CEO is cool on automation goes against some of the pitch to go computerized — production and delivery of the product.

“Trucks break down in the middle of nowhere, trust me,” he said, noting that there’s no driver to get out and diagnose the problem. Reaction time to that equipment can create more down time.

The trucks also drive slower when automated, which can produce quicker wear and tear, but allows for more to be done in a given time period.

He points to the Japanese steel mills in the 1990s, which had no option but to implement widespread automation. The country’s population was aging quickly, and a new generation was not willing to take shifts in the steel mills.

The 90s in particular were tough on Japan as a whole. Its GDP dropped by about $1 billion in what is colloquially referred to as the “Lost Decade” when the economy tanked and wages plummeted by 5 percent.

At the mills, with a dwindling amount of workers, the Japanese implemented computers and machines to get the job done and avoid shutting down. Now, 20 years later, Goncalves said, the mills are a lot weaker.

Instead, automation has uses to lesser extents in American mines. It is used in training and simulations, and also for data collection purposes. But disrupting the industry’s current structure? Not now, and maybe not during our lifetimes.

“The iron ore mining business is structured … We are better off keeping the operators and keeping it operated by men and women,” Goncalves said. “I’m a realistic guy, and I don’t go after the latest trendy thing. I know I sound like a different kind of guy sometimes, but I’m realistic. When push comes to shove, reality takes care of everything they talked about two or three years ago.”