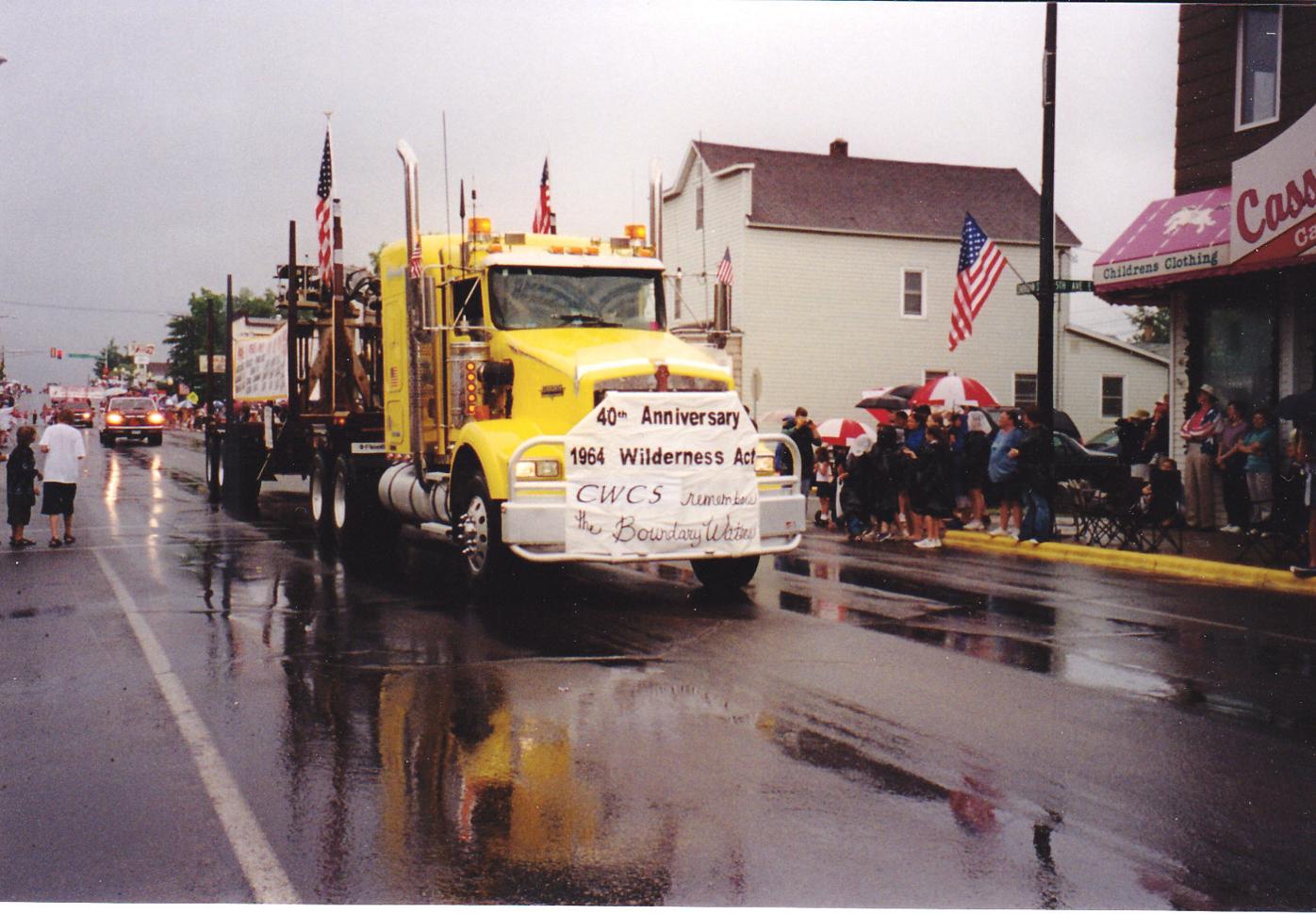 Banners made for the 40th anniversary of the 1964 Wilderness Act in 2004 were featured in Ely’s 4th of July parade. 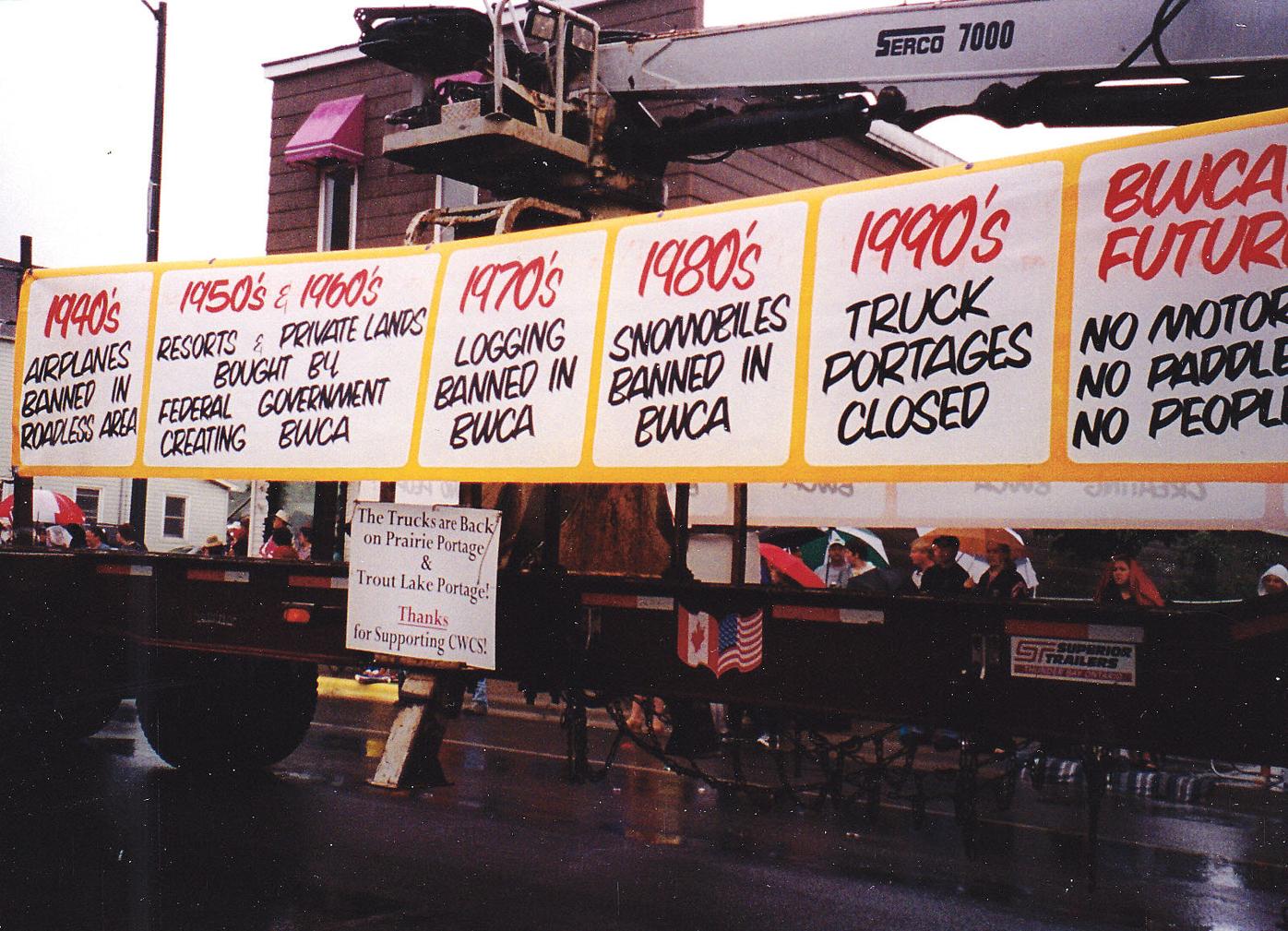 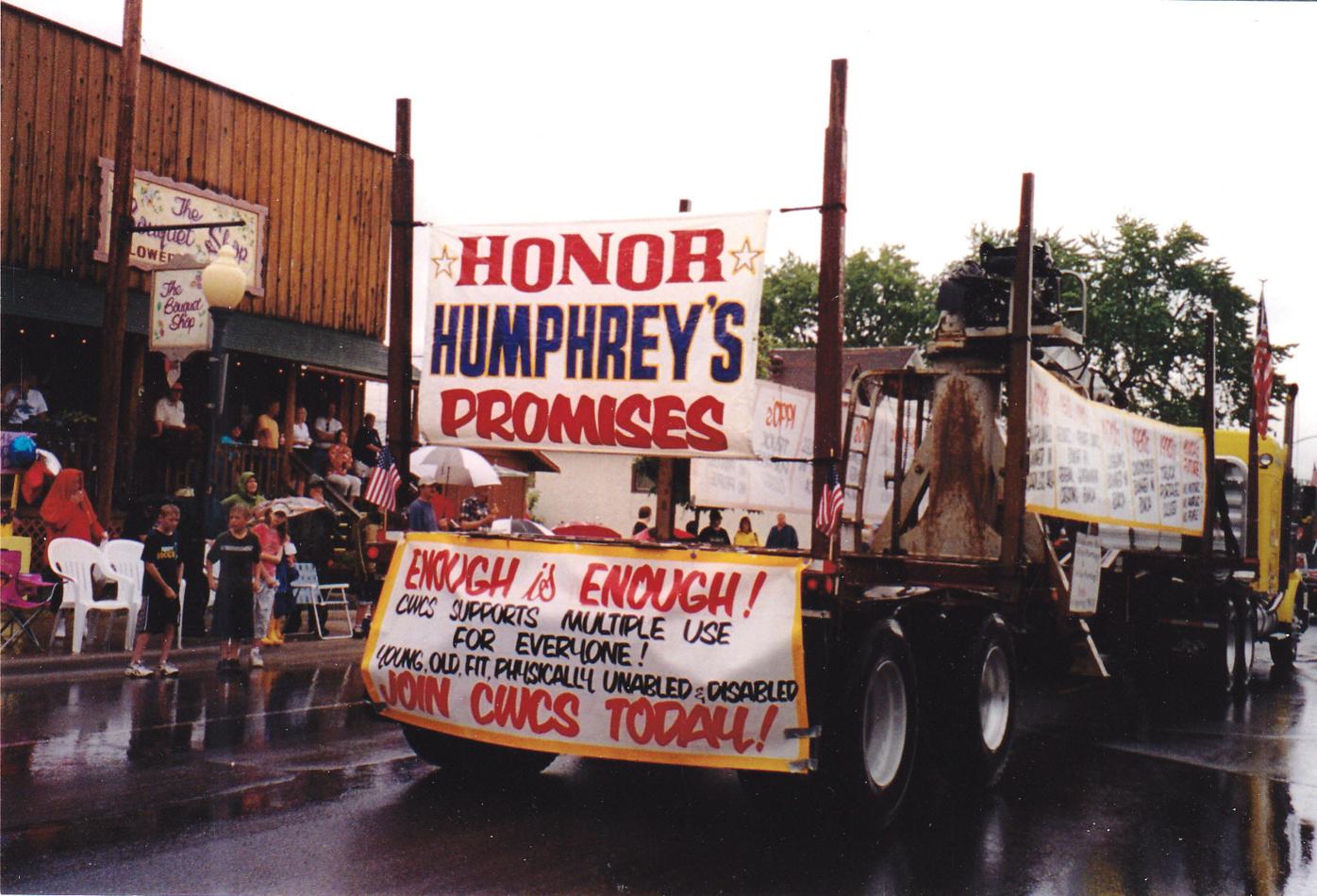 Banners made for the 40th anniversary of the 1964 Wilderness Act in 2004 were featured in Ely’s 4th of July parade.

What started as acknowledgement of the importance of our forested areas to our developing nation became a push for wilderness to stop all development. Three main road corridors – the Echo Trail, Fernberg Trail and Gunflint Trail were developed that opened up the area to recreational opportunities. This was after the area had been logged off by Swallow and Hopkins lumber company.

After World War I there was a great desire to get as far away from the sights and sounds of war. Many pilots headed to northern Minnesota to find that solitude. Their little havens developed into remote, fly-in fishing camps/resorts that were inaccessible by roads. One the first fishing camps was Bill Berglund’s Isle of Pines Fishing Camp on Knife Lake. The Isle of Pines became a very popular destination after Bill’s death when Dorothy Molter (the Rootbeer Lady) took over.

Shagawa Lake in Ely, Minnesota became the largest inland seaplane base in the world. It is currently the only U.S. Forest Service Seaplane Base outside of Alaska.

The push for wilderness by various groups such as the Wilderness Society and Izaak Walton League led to the demise of the fly-in fishing camps, and the condemnations and buyouts of resorts.

It took eight years, from 1956 to 1964, to get the 1964 Wilderness Act passed. Senator Hubert Humphrey included wording in the legislation that would allow the continued use of logging, motor boats and snowmobiles. What has been ignored in this legislation for the past 54 years (by both Parties) is the mandate that state lands completely surrounded by national forest lands within areas designated by this Act as wilderness, … shall be exchanged for federally owned land in the same State of approximately equal value.

When Congressman James Oberstar was elected in 1974, he looked to resolve the continuing Boundary Waters dispute. He proceeded to do what the 1964 Wilderness Act mandated. “…Report to President. (c) Within ten years after the effective date of this Act the Secretary of the Interior shall review every roadless area of five thousand contiguous acres or more in the national parks, monuments, and other units of the national park system… and shall report to the President his recommendation as to the suitability or non-suitability of each such area or island for preservation as wilderness...”

Oberstar acknowledged that the center of the Boundary Waters Canoe Area was not true wilderness as it had been logged several times and there were long established motor uses. Oberstar proposed the center of the BWCA become a National Recreation Area with the 600,000 acres to the east and west be designated as wilderness.

The 1978 BWCA Wilderness Act was signed forty years ago by President Jimmy Carter. Wilderness status was given to the area; 50,000 more acres were added to the Boundary Waters; logging was banned; motors were banned on more lakes; limited motorized use is allowed on 16 of the 1100 lakes of the BWCA; and snowmobiles were phased out after 1984; but two short snowmobile routes remain to access Canada.

83,000 acres of Minnesota School Trust Lands remain in the Boundary Waters. Legislators support a hybrid plan to exchange only 30,000 acres and have the federal government purchase the remaining 53,000 acres through a third-party Conservation Fund/Potlatch deal, similar to the deal made to expand the Boundary Waters by 50,000 acres with the passage of the ’78 legislation.

After the ’78 Act passed, it took nearly ten years for businesses to change their focus and recover. Many businesses were lost and people left the area.

People of northern Minnesota thought the assault on their way of life was over, but it’s never enough for extreme preservationists. The Friends of the Boundary Waters came back ten years later with the removal of trucks from three portages. When trucks were returned to only two of the portages in 1999, the Friends attacked the Chain of Lakes permit quotas. The Forest Service has ignored the courts mandate that they recalculate the Chain of Lakes permits saying they don’t have data from 1976, 1977 and 1978 to base recalculation upon.

The Friends’ always wanting more was evident after Wellstone’s mediation failed and their attorney Brian O’Neill said: “(We will) embark on a 10 year campaign to get every single motor out of the Boundary Waters” – quoted in May 20, 1998 Mpls. Star Tribune.

They are still working on that goal. In fact, in 2003 the Friends announced a new proposal for 90,000 more acres of the Superior National Forest in northeastern Minnesota to be designated as wilderness.

The latest attack has been on the number of towboats used in the Boundary Waters which has turned into a Forest Service review of all commercial uses.

This will affect towboat-use that aid canoeists through the motorized lakes, fishing guides and sled dog guides.

Regarding opposition to Twin Metals’ proposed underground copper nickel mine – an EIS was completed by the USFS in May 2012 under the Obama Administration.

In December 2016, President Obama signed an executive order to withdraw 234,000 acres in northern Minnesota from future mining and exploration. There was no input on this decision from state, county or city officials.

According to the Federal Register, a study was to be conducted on this withdrawal to determine if mining should be banned for twenty years.

The study was to take up to two year. Within this time period, the Trump Administration could approve, deny or cancel the application. The study ended a few months short of two years with no new scientific information to warrant a twenty year ban on mining. Secretary of Agriculture Perdue canceled the application.

The ‘78 BWCA Wilderness Act also established the Mining Protection Area which includes the Echo Trail, Fernberg and Gunflint Trail. Mining is banned in the Boundary Waters.

Outside of the wilderness, mining and exploration in the Superior National Forest is an allowable use.