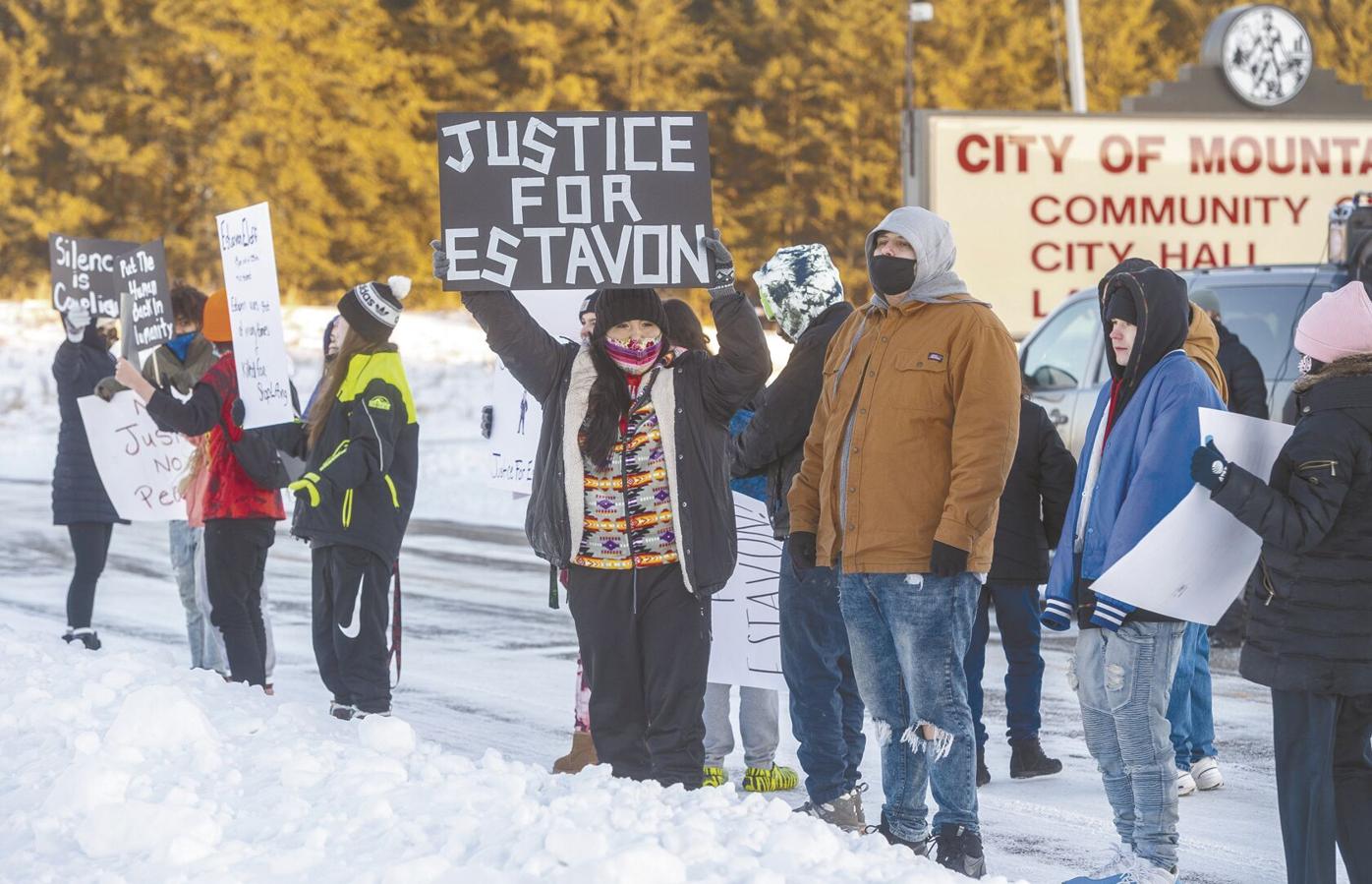 About 20 people protest outside the Mountain Iron office of the St. Louis County Sheriff's Department Monday afternoon demanding answers to questions about the shooting of 19 year old Estavon Elioff by two deputies on December 5th. 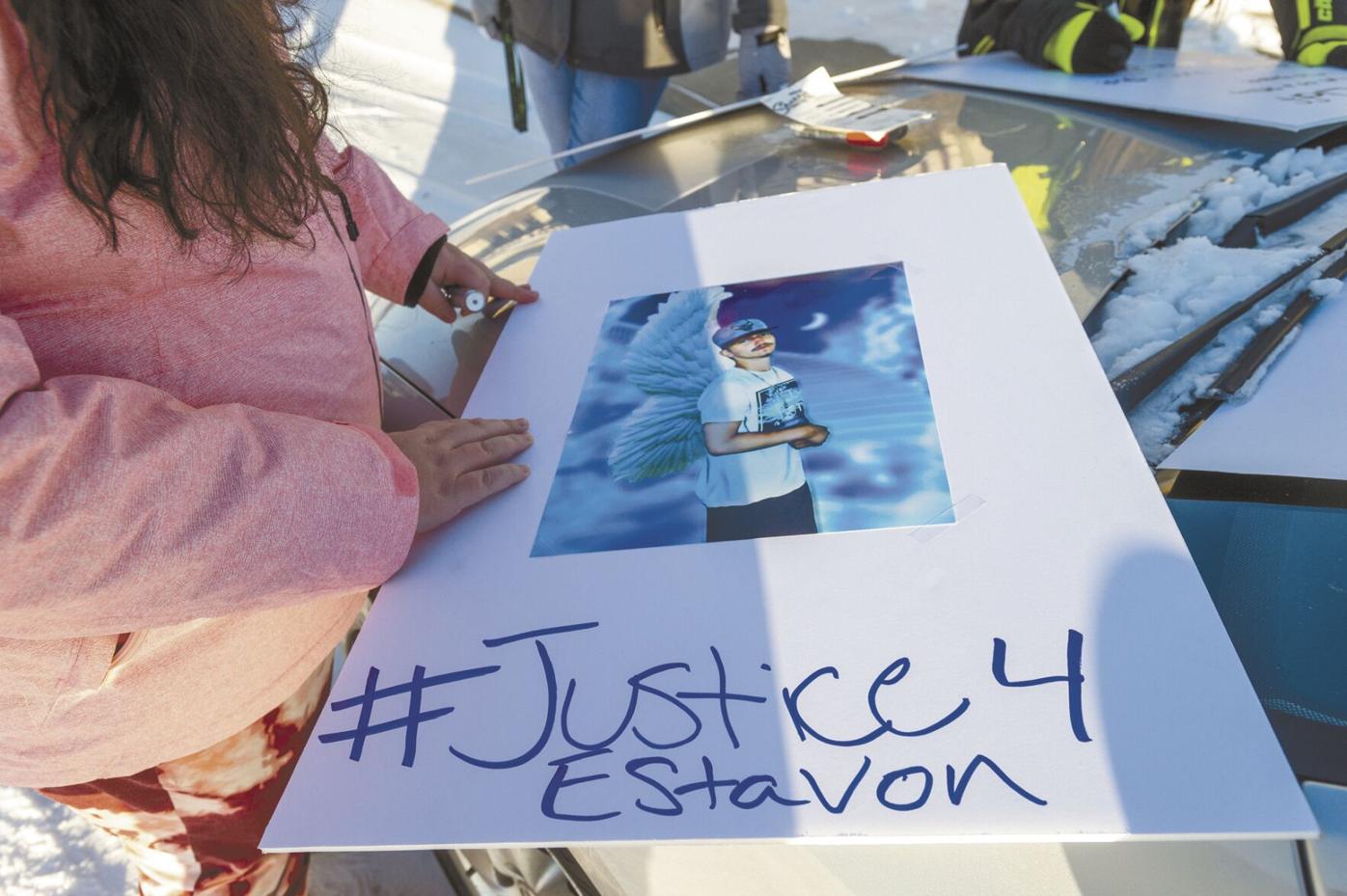 A cousin of Estavon Elioff holds a poster depicting an image of Elioff before a protest Monday afternoon in Mountain Iron. The 19 year old man was killed on December 5th. by two members of the St. Louis County Sheriff's department and the protest was to demand answers from the investigation.

About 20 people protest outside the Mountain Iron office of the St. Louis County Sheriff's Department Monday afternoon demanding answers to questions about the shooting of 19 year old Estavon Elioff by two deputies on December 5th.

A cousin of Estavon Elioff holds a poster depicting an image of Elioff before a protest Monday afternoon in Mountain Iron. The 19 year old man was killed on December 5th. by two members of the St. Louis County Sheriff's department and the protest was to demand answers from the investigation.

MOUNTAIN IRON — Protesters on the Iron Range stood outside the St. Louis County Sheriff’s Office and demanded answers regarding the death of Estavon Dominick Elioff. Speakers drew attention to the limited details from law enforcement amid the state’s investigation of the 19-year-old Virginia man who was shot and killed by deputies in early December.

Several of Elioff’s relatives from the Range joined members of the Voices for Ethnic and Multicultural Awareness of Northern Minnesota and others to demonstrate at about 3 p.m. on Monday outside the Mountain Iron Community Center which harbors one of the Range-based Sheriff’s Offices along Highway 169.

About 20 people gathered in sub-zero temperatures. Some held “Justice for Estavon” signs, while they chanting “No Justice, No Peace.” “I just can’t comprehend how my 19-year-old cousin — 125 pounds — was a threat to the deputies,” Mariah Krulich told the Mesabi Tribune.

Sgt. John Backman from the St. Louis County Sheriff’s Office emerged from the building to take a cell phone video of the protesters. As protesters warmed up in their vehicles, the law enforcement official came outside once again and drove up to several rally-goers to tell them he was leaving the office for the evening and no one else was inside the building.

Around 4 p.m., members of VEMA and others drove east to Virginia City Hall, where they planned to continue the protest. About forty minutes later, Backman returned to his building in Mountain Iron, where he told the Mesabi Tribune that “the Sheriff’s Office is appreciative of people voicing their opinions and views in a calm manner.”

The protest on Monday took place more than three weeks after Elioff died on Saturday, Dec. 5, after being shot by two sheriff’s deputies during a foot chase in the woods of Mountain Iron.

“A deputy made contact with the adult male outside of the business, at which time he refused commands and then fled on foot,” the Sheriff’s Office said in a statement. (The original statement did not name Elioff as the suspect.) Deputies set up a perimeter of the area with help from the Gilbert, Eveleth and Virginia police departments and Minnesota State Patrol. “During the search, deputies learned that the man matched the description of a suspect in a drive-by shooting incident that happened on December 4 in Virginia.” About an hour later, deputies and a K-9 officer located Elioff in the woods. “At one point, deputies deployed tasers and eventually two deputies discharged their firearms, striking the man,” the statement said, adding that emergency responders rendered medical aid to Elioff, before he died at the scene.

On the day of the fatal shooting, the Sheriff's Office announced that the deputies involved in the case had been placed on administrative leave.

Three days later, the Minnesota Bureau of Criminal Apprehension identified Elioff and also named Ryan Smith and Matt Tomsich as the “deputies who discharged their firearms.” In its first statement since the incident, the BCA said that the Midwest Medical Examiner had confirmed Elioff’s identity and reported that he “died of multiple gunshot wounds” during the incident in Mountain Iron.

The BCA said there were no witnesses to the death. “St. Louis County sheriff’s deputies do not wear body cameras and dash cameras did not capture the incident,” the statement read. The state agency also said a knife was found on the scene, but law enforcement have not since commented on whether the knife belonged to Elioff, if he threatened the deputies with the weapon, or any other circumstances of their encounter in the wooded area.

When asked for updates on Monday, Bruce Gordon, director of communications at the Minnesota Department of Public Safety, told the Mesabi Tribune in an email that “the BCA’s investigation remains open and active. He continued, “Under Minnesota law, the BCA is prohibited from providing details about an investigation while it is active. When the investigation is complete, the BCA will provide its findings without recommendation to the St. Louis County Attorney’s Office for review.”

The protest came after members of VEMA held a memorial for Elioff in the woods near where he died on Saturday, Dec. 19.

Nathaniel Coward, a co-founder of VEMA, read a statement belonging to Elioff’s mother, Jacqueline Martinez, who resided on the Range before moving to Vancouver, Wash. “She’d like to know that her son’s death is a tragedy,” he read. “It shouldn’t have happened and that we look for transparency and accountability from law enforcement and their investigation.” He continued, “A 19-year-old, still dead. He still has a mother, still has sisters. He still has people who love him and he’s still a person. I don’t think it’s right when they try to dehumanize him to make it see like because of his record or what he’s done he’s no less of a person than anybody else.”

Pastor Kevin Olson, from Our Saviors Lutheran Church in Hibbing, who is also a VEMA board member, presided over the memorial. “A death is a death and this is a very tragic death,” he said. He continued, “Unfortunately, as these woods verify, the passing of Estavon Dominick at this point, that passing is laced with a lot of unanswered questions. A lot of pain. A lot of angst.”

The pastor prayed for “earnesty and consistently for transparency to get further answers” from the investigation.

Members of VEMA said they had talked with Martinez about the lack of community attention regarding the man’s death. They took issue with the numerous social media comments seemingly justifying the fatal shooting at the hands of law enforcement. For example, local citizens have reportedly been blaming Elioff’s death on his alleged disobeying orders from officers and some continue to post unfounded descriptions of him as well as the two deputies who shot and killed him on duty.

“We get a lot of talk about somehow we don’t support police and sheriff’s and all that, but that’s not true,” Coward said. “It’s just that we want transparency when something happens. And we speak out when something happens that shouldn’t be happening.” He continued, “I don’t know how people can just be OK with it.”

Seraphia Gravelle, a Hispanic woman who moved from Texas to the Range several years ago, had organized VEMA in May following the death of George Floyd, a Black man, under the knee of a white police officer in Minneapolis. She was joined by dozens of local residents, including Coward, a Black man who moved to the Range from Florida in 1994 to play football at Vermilion Community College in Ely. Together, they held rallies in the predominantly white cities of Chisholm and Hibbing, roughly 200 miles north of the Twin Cities.

In the aftermath of additional rallies in Virginia and Grand Rapids, members of VEMA partnered with the Hibbing Police Department and other local leaders - including a city councilor, school psychologist and a teacher - in creating the Anchoring the Blue Task Force meant to “address racism and equal rights of all community members in the City of Hibbing,” as Police Chief Steve Estey wrote to the Mesabi Tribune in a letter to the editor published in June.

The Task Force has since been meeting at least one time a month, mostly on Zoom during the pandemic months. Its members have discussed a wide range of race-related issues that largely surround the experiences of people of color who live and work in a region where the population remains 95 percent white. Members have set a goal to resurrect Hibbing’s Human Rights Commission and called for additional advertising of local board positions in hopes of drawing a more diverse grouping of candidates.

While citizens in the region have expressed support for the group, others in the area have attended VEMA rallies holding Confederate flags and continue to dismiss the idea that racism exists on the Range, a historically immigrant region. Others in the neighboring communities have remained silent on the subject of race altogether, and county commissioners, mayors and most local officials have yet to attend one of the rallies or Task Force meetings.

For Gravelle, she sees similarities between the deaths of Floyd and Elioff, both people of color who were killed by white police officers. She raised concerns over there being no witnesses to the local death except for law enforcement officers. “What if no one recorded the death of George Floyd?” she said. “Why aren’t people on the Range more outraged? Our young people are in mourning.”

Members of VEMA have been questioning the Virginia Police Department’s report that Elioff “matched the description” of a suspect in the recent drive-by shooting. They note that the department has not officially named him as a suspect in the incident.

The same week of Elioff’s death, a BCA spokesperson told the Mesabi Tribune that the local incident was being treated as “separate from the BCA investigation.” At that time, Virginia Police Chief Nicole Mattson declined to name Elioff or anyone else as a suspect in the drive-by shooting. She also declined to provide a description of two suspects who are allegedly involved in that case, saying the “investigation is still open so I can't comment any further at this time.”

When asked for updates on the case, the Virginia Police Department on Monday told the Mesabi Tribune in an email that “the case is still under investigation as we wait for the arrival of data and information to search warrants we executed.”

The BCA has said Smith and Tomsich, who have a combined 23 years with the sheriff’s department, have declined interviews with state agents. “Attorneys for the deputies provided unsolicited written reports from the officers to the BCA on Tuesday. Both deputies are on standard administrative leave.”

Afterward, their attorneys told the Star Tribune that the deputies welcomed being questioned by investigators. “The BCA agent didn’t want a written report and only wanted an oral interview,” attorney Aaron Morrison, who is representing Tomisch, told the newspaper. Smith’s attorney, Paul Rogosheske, said his client was following guidance from his union. Both deputies are members of the Minnesota Police and Peace Officers Association, which supported their written reports.